Apple has acquired iFixit, a site popular for its in-depth teardowns of Apple devices. CEO Kyle Wiens announced the acquisition on the website earlier today noting that Apple offered the company "a number we couldn't refuse".

---
We’re pleased to announce that iFixit has been acquired by Apple!

iFixit is the industry leader in the global repair movement. With more than 10,000 repair guides and millions of community members worldwide, iFixit has become the most trusted source for “before-you-buy” reviews of consumer electronics and “after-it-breaks” repair documentation.

Apple buys smaller technology companies from time to time, and generally does not discuss their purpose or plans. And financial details have not yet been disclosed. But, we at iFixit feel we ought to explain ourselves to our loyal community.

“Everyone has a number”, admitted Kyle Wiens, iFixit’s CEO. “I didn’t think there was a reasonable number that would make me say, ‘You know I was going to change the world with repair documentation but here’s a number.’” In the end, Apple gave us a number that we couldn’t refuse.

But it isn’t just a number for iFixit. As part of the deal, Apple made a commitment to produce the most replaceable electronic devices and personal computers on the market. This is a clear win for the whole iFixit community.

Apple is working hard to make devices last long enough to be upgraded or irrelevant, making repairability an antiquated notion. iFixit will become a key player in the future of Apple device development, starting with the new Smartphone Replaceability Index.

It has been an exciting adventure for all of us at iFixit, and we can’t thank our dedicated community enough.

Let’s start our next chapter together!
---

As many of you are aware, it is April 1 (April Fools' Day) 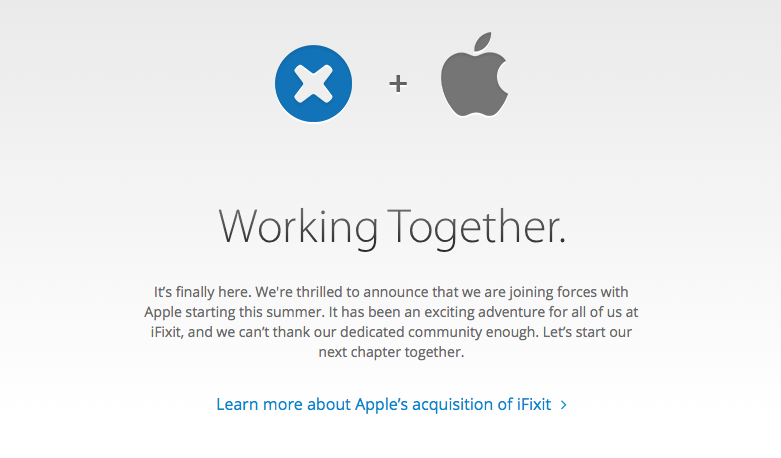 Wee Willy Spunker - April 1, 2014 at 9:09pm
Love how people try to change their mind on loving apple when they actually didn't take back what they said yet, how else to we believe deceives like that? Yup gotta love how much a fail based on how long you put on those sheep paws you used to make up that much time like that.
Reply · Like · Mark as Spam
34 More Comments
Recent