Mac shipments dropped 13.4% year over year last quarter, according to the latest Gartner data. Worldwide PC shipments reached 68.9 million units in the third quarter of 2016, a decrease of 5.7%. Gartner says this was the eighth consecutive quarter of PC shipment declines, the longest in history.

"There are two fundamental issues that have impacted PC market results: the extension of the lifetime of the PC caused by the excess of consumer devices, and weak PC consumer demand in emerging markets," said Mikako Kitagawa, principal analyst at Gartner. "According to our 2016 personal technology survey, the majority of consumers own, and use, at least three different types of devices in mature markets. Among these devices, the PC is not a high priority device for the majority of consumers, so they do not feel the need to upgrade their PCs as often as they used to. Some may never decide to upgrade to a PC again.

The top six vendors combined for a record high 78 percent of PC shipments in the third quarter of 2016. Lenovo continued to be the worldwide market leader based on preliminary PC shipments, but HP Inc. is nearly tied for this top spot. Lenovo recorded six consecutive quarters of year-over-year shipment declines, while the nearest competitors, HP Inc. and Dell, recorded shipment growth since the second quarter of 2016.

A big reason for Apple's decline in shipments is due to lack of updates across all its Mac products. It's been 511 days since the MacBook Pro has been updated and even longer for the Mac mini and Mac Pro.

The company is said to have a big Mac update planned for later this month which will reportedly bring a new OLED touch bar to the MacBook Pro. 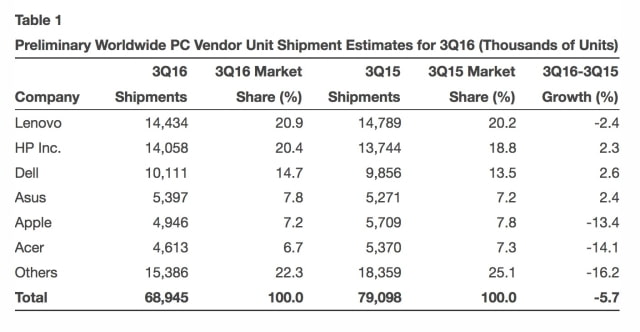 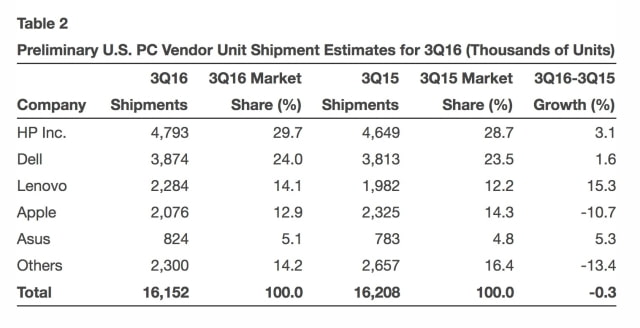 PHUKAI - October 12, 2016 at 4:07am
At least it doesn't explode, plus it would have to shrink everything to be thinner than the jack in order to kill it which will never happen.
Reply · Like · Mark as Spam