When opening a 32-bit app in iOS 10.3 beta, users are warned that "This app will not work with future versions of iOS. The developer of this app needs to update it to improve its compatibility."

The warning has led many developers to believe that Apple will drop support for 32-bit apps with the release of iOS 11.

Looking at app intelligence data, Sensor Tower says this could affect about 187,000 apps.

Analysis of currently active apps that have ranked in either the top free, paid, or grossing charts at some point since their release shows that this number stands at approximately 187,000 or about 8 percent of the roughly 2.4 million apps on the App Store worldwide. 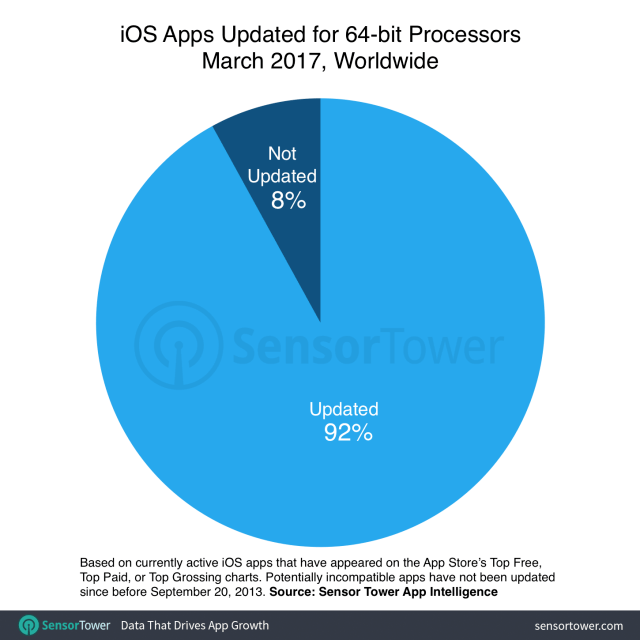 Check out the chart below for a breakdown of how many apps could be affected in each App Store category. If you have a favorite app that is still 32-bit, you may want to encourage its developer to update! 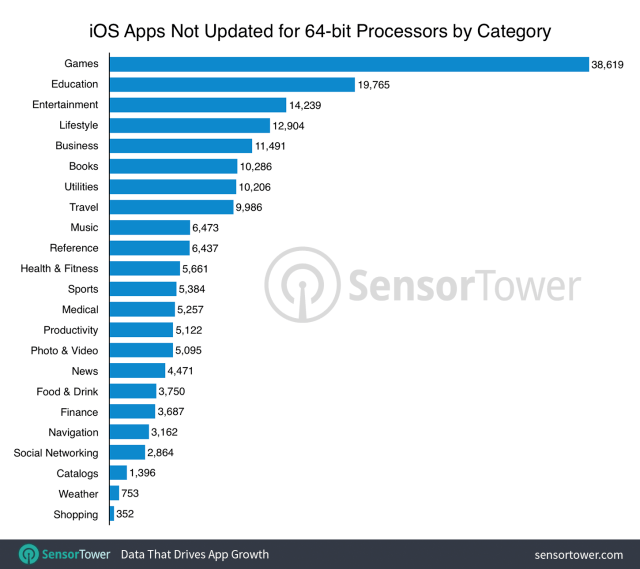 Nitemare - March 17, 2017 at 12:11am
How about telling us why 64 bit is needed? Oh wait you didn't. My iPhone 5 works just fine without 64 bit. Another Apple failure. Just forcing you to upgrade to give them more money. It's all about profits for Apple. Nothing else
Reply · Like · Mark as Spam

H - March 16, 2017 at 6:35pm
On a more superficial side note, will it have color themes at least? It doesn't need to change anything else other than st least the color just for variety. I'm tired of this hospital white. One color all the time is a little boring. I know jailbreaking it will allow me to do this but I'd prefer not to jailbreak my iPhone. I'm too stupid for that and I want to make it easy like most other stuff here on the iPhone. They really should give us at least other color combinations like blues and greys at least.
Reply · Like · Mark as Spam

Egresstam - March 16, 2017 at 3:48pm
Developers should no longer develop using 32 bit anyways. If your APP is not supported you did it to yourselves ! Stay with the trend !
Reply · Like · Mark as Spam
Recent