A new rumor claims that Apple will name its 10th anniversary smartphone the 'iPhone Edition'; rather than calling it the 'iPhone 8' or 'iPhone Pro'.

iDrop News purports to have received 'exclusive information from a source with intimate knowledge of Apple’s manufacturing facility', dispatched by Benjamin Geskin. Some of the details contradict many of reports we've been hearing over the past few months.

The new device is said to feature a vertical dual-lens camera, possibility for better depth of field when used horizontally within an AR/VR headset. Additionally, there's allegedly a dual-lens camera setup on the front of the device; likely for 3D sensing capabilities.

Their source claims that rumors of a glass back are incorrect.

Apple’s current iPhone Edition prototype features a ‘metal’ back plate. Apple’s decision to switch to metal over glass was authorized due to the tendency glass has to shatter when dropped.

The site also claims that the Touch ID sensor will not be embedded into the display; rather, it will be moved to the back of the device similar to how it is on many Android devices.

Check out their 'iPhone Edition' mockup below and let us know what you think in the comments! Please follow iClarified on Twitter, Facebook, Google+, or RSS for updates. 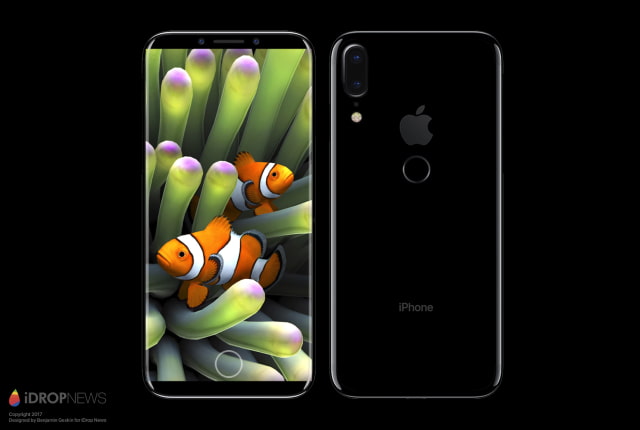 Mang Domeng - March 31, 2017 at 10:32pm
I don't think Apple will put the fingerprint sensor at the back. The iPhone 7's home button is not a physical button anymore. Since they have achieved to make it as a sensor/button at the same time it is possible to put a LCD display on top of it.
Reply · Like · Mark as Spam

Mark Green - March 30, 2017 at 4:38pm
hummm id at the back.. maybe, im sick of the speed of the touch on the front anyway there are times i like to just glance at my C without the phone flying open unlocked but i can live with that, on the back will mean gloves off for sure, a bit more complicated.
Reply · Like · Mark as Spam

Luigi Rausch - March 30, 2017 at 12:03pm
Ciao! My name is Luigi Rausch and I wanted to get your opinion on something. As far as the iPhone 8, being it will be the 10th anniversary edition and nobody really knows what the "official" name will be. What if they called it the "Apple Phone" removing the i in iPhone. Why do I think they would do this? They have been progressively changing their naming schemes since the "Apple Watch” and now they have of course "Apple AirPods" "Apple TV" "Apple Music" “Apple Pencil” etc.. Along with this new naming scheme as Apple did with the Apple Watch the following Apple Phone could be the Apple Phone Series 2, which would be the same as the S updated versions. Then the following year could be the Apple Phone 2 and following that the Apple Phone 2 Series 2 etc..I say this because the materials and the naming scheme from the Apple Watch always tend to trickle into the iPhone, like the 3D Touch, soon to be OLED display, and the possibility of a ceramic body. To enforce this all further, as you know Apple recently changed the Mac operating system name from OS X to macOS. Now with the upcoming iOS 11 they are making big changes to differentiate the iOS's for the future iPhones and iPads as the iPads are so much more powerful now (already running a very different version of iOS than is on the iPhone). Hence they will change the naming scheme of that as well, most likely phoneOS and padOS. If Apple were to do this they wouldn't by any means be throwing away the iPhone name. Instead they would continue to use it on their cheaper older version phones at least for a few years to come, being they always give consumers some cheaper options. The Phone would then be reserved for the flagship model of course that is coming out. This would in-turn make the transition slow giving users a chance to adopt the name and at the same time separating it from the rest of the line, making it stand out more for sure. I think it also signifies and sets the tone for a new generation for Apple as a company and how this next generation of Phone's are going to change everything..again..as did the first iPhone ten years ago. We both know Apple has some crazy new tech up their sleeves just from what we’ve seen from their patents alone. I am writing to you because I have found nobody that even remotely mentions this possibility for the next iPhone and I wanted to get your expert opinion. P.S. I also attached a link here to a video I created where I talk about this all more in detail if you are interested in hearing more! https://www.youtube.com/watch?v=St5dF86Uf8k Thanks so much for listening. ~ Luigi Rausch
Reply · Like · Mark as Spam
12 More Comments
Recent