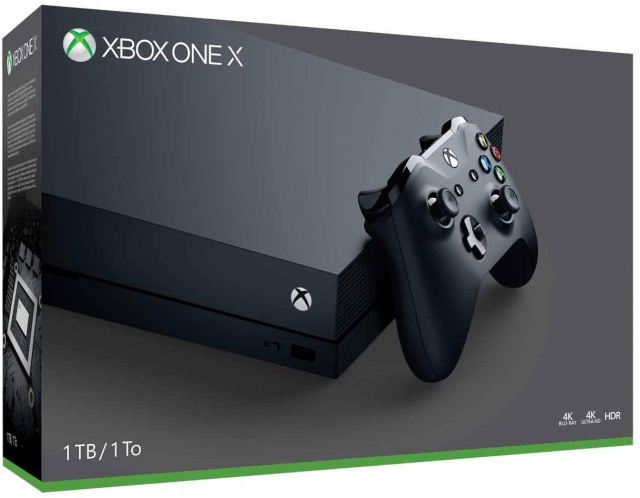 Description:
The world's most powerful Console. Games play better on Xbox One X. With 40% more power than any other Console, experience immersive true 4K gaming. Blockbuster titles look great, run smoothly, and load quickly even on a 1080p screen. Xbox One x also works with all your Xbox One games and accessories as well as Xbox live, the most advanced multiplayer network, giving you more ways to play. Broadband internet required (ISP fees apply). online multiplayer requires Xbox live Gold subscription (sold separately - ISP fees may apply) Do I need a 4K TV to benefit from the Xbox One X? No. The power provided by the Xbox One X allows developers to use techniques like supersampling, anisotropic filtering, and others to produce a better 1080p image. Additionally, games will have the ability to run at higher framerates and with faster load times.1 What is supersampling? Supersampling is a technique game developers can use to improve graphical fidelity. By utilizing the additional power of the Xbox One X, developers can process images at a higher resolution, and then scale them down to fit the display resolution the player is using. Supersampled images reduce aliasing (commonly referred to as "jaggies") and generally look "cleaner" to the naked eye compared to a non-supersampled image at the same resolution. Will my current controllers and accessories work with Xbox One X? All Xbox One accessories (controllers, headsets, chatpads, remotes, etc.) will work with Xbox One X. Kinect for Xbox One is also compatible with Xbox One X via the Xbox Kinect Adapter (sold separately). Will there be two different versions of games—one for the Xbox One S and one for the Xbox One X? No. There will be one version of all games and they will work on all Xbox One consoles.

Features:
● Games play better on Xbox One X. Experience 40 percent more power than any other console
● 6 teraflops of graphical processing power and a 4K Blu ray player provides more immersive gaming and entertainment
● Play with the greatest community of gamers on the most advanced multiplayer network
● Works with all your Xbox One games and accessories
● Great for 1080p screens games run smoothly, look great, and load quickly