Apple's App Store led the way as the most popular app store in Q1 2011 with 59% market share, according to research2guidance.

The site notes that Apple had 81% market share in 2008 and has done well to fight the onslaught of new app stores which now total 58 in number.

Research2guidance says the next two years are critical for Apple in maintaining its supremacy.

If Apple manages to slow down its market share loss over the next two years it will be difficult for other players to overtake Apple for a long time. There are two main effects that narrow down the time for competitors to catch up.
● Mass market effect: Smartphone penetration will reach 50% in most of the developed countries by 2014/2015. The more smartphones become a mass market phenomena the less app downloads a new user will add.
● Lock-in effect of downloaded apps: The more apps a smartphone user has downloaded and the more money he has spent on those apps, the less likely it is for him to switch his mobile platform and, in the case of Apple, to put aside his iPhone, iPod Touch or iPad. 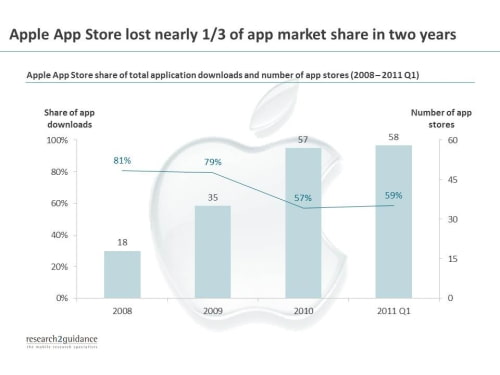