Richmond notes that last quarter Apple brought in $4.976 billion in revenue from selling 3.76 million Macs with an average price of $1,323.40. At a 28% gross margin estimated by Jefferies analyst Peter Misek, Apple makes $370.55 for every Mac sold.

HP's PC Group brought in $9.415 billion in revenue and turned $533 in profit last quarter. Their operating margin was 5.66%. Richmond notes that if HP spent 1% of their total revenue on operations then their profit margin was 6.66%; however, he used an generous 8% profit margin for his calculations.

The average selling price of a Mac increased 5.71% over the last two quarters. If we apply that growth rate to NPD’s data that says the ASP of a PC was $615 in November, then the ASP of a PC today is $650.12. Multiply that number by an 8% profit margin and HP makes $52.00 for every PC they sell.

So Apple makes more money selling one computer than HP does selling seven! 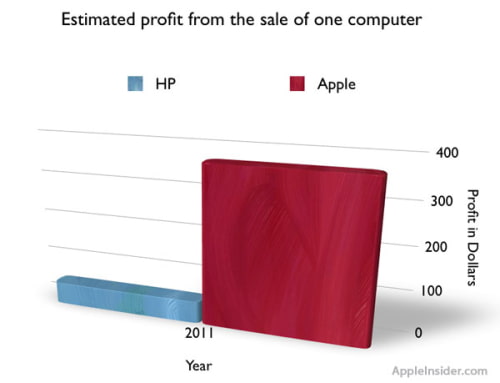 Mr yogi - June 26, 2011 at 6:41am
I have to admit apple products last long although over priced. Someone should Do a 3 year study between a Mac laptop and a Dell/hp laptop and see how their performance is over time. I'd like to see that.
Reply · Like · Mark as Spam

smate333 - June 25, 2011 at 7:39pm
Being a PC "assembler" as HP, one could assume most of the profit goes to pay for software licensing, which expense no longer can be redirected on the consumer if the company's intention is to stay competitive on the free market, striving to stay alive. Apple's success could be thanked for clever marketing, flawless design, reliable functionality and the opportunity to be inter-platform compatible while securing sole ownership of Mac OS. Windows' "licensability" ironically locked in Apple's huge success on the intel platform, giving confidence to consumers to buy. Unfortunately Jobs is sick and probably gone soon, which will end this phenomenal story. Next big thing: Mind Controlled Operation, because we've become so lazy we don't even want to pick up the remote anymore:)
Reply · Like · Mark as Spam

digihead - June 24, 2011 at 6:53pm
even this is true, what makes me laugh is \"according to research done by Matt Richman, a FIFTEEN YEAR old high school student.\" :D:D:D:D According to my grandma and aunt Bettie - computers are evil! :D:D:D:D
Reply · Like · Mark as Spam

Some guy - June 24, 2011 at 3:38pm
You would think their product was built to last a decade...overpriced piece of shit! Stay away from Apple products if you\'re hoping your goods would last
Reply · Like · Mark as Spam
9 More Comments
Recent