PwnPlayer is a new media player app that will aim to be a full replacement for your current default iPhone player.

-----
Here it is my next application to be released along with iSlsk for 2.0 firmware within a few days. It's called PwnPlayer (in honor of the jailbreaking tool we all know and love), and is a media player app that will aim to be a full replacement for your current default music app.

The reason why I made PwnPlayer in the first place was because iSlsk's music import feature is no longer available on 2.0 firmware. So I needed something to be able to play my downloaded music in the iPhone file system in a 'cool' and friendly way.. the apps out there for this purpose weren't any good at all, so that's why I decided to make an app that mimics the MobileMusicPlayer interface, as well as enables a lot of extras.

Key features include (all shown in the video above):

- For Linux, iSlsk users and iTunes haters: File system playback. PwnPlayer reads any folder inside your iPhone/iPod file system and will play mp3s the same way MobileMusicPlayer does, with playlist, artwork and add/remove/tag edit support. Simply drag and drop your mp3 files using your favorite file browsing app such as WinSCP, CureFTP, CyberDuck or iPhoneBrowser... Or download them using iSlsk or any other music download app!

- Search: type in the first letters of the song/artist/album/file you are looking for, tap search and it will appear right there for you.. works both with music library and file system songs.

- Lock-Screen gesture controls: this is one of my favorites. You can control your PwnPlayer by swiping your finger on the lock screen, for easy handling from your pocket.. without having to unlock the device. If you haven't seen it already in the video above, here's a screenshot: 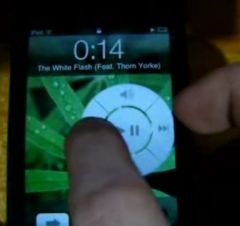 - CoverFlow: mimcs almost the same coverflow appearance seen in MobileMusicPlayer. It works only with iTunes library for now, but in the future will also support file system mp3s.

- Background mode: PwnPlayer is for jailbroken devices, so you don't have to worry about it not being able to run in background. Screw Apple SDK ridiculous rules!

- SpringBoard integration: PwnPlayer automatically integrates with SpringBoard. You will see the current playing song info in your lock screen, and you'll be able to use the home double-tap shortcut to control music playback when you are in another app while PwnPlayer is running on background.

All the above will be available on its first release. Future updates will include:

- Plug-ins: Yes, if the aforementioned wasn't enough, you will still be able to add more and more features to PwnPlayer thru it's plug in system. Or even make your own plugins and distribute them! support for more formats, Lyrics viewer, a Last.FM scrobbler, streaming.. imagine what could be done, and that you will never see on default MobileMusicPlayer.

- Video: Currently PwnPlayer does not support video playback, but it's one of its top priorities for future updates.

- Support for genius playlists?: I still don't know how difficult will be to support this new feature introduced in 2.1 firmware, but yes, it might be available in future updates as well.

- Move music files between file system and music library back and forth?: well, I already said this is not available now because the new iTunesDB security checksums have not been cracked yet.. but if someday they finnally get fully reverse engineered, this will be completely possible.

A few more small things need to be finished, and it will be released on Cydia along with the long-awaited iSlsk (called iSoulseek from now on) for 2.0 firmware.
-----