A new iPhone model also means a probable uptick in attempts to steal them. And since Friday’s launch of the iPhone 5s and 5c also happens to coincide with the launch of Apple’s iOS 7, which has some new security measures intended to deter theft, New York’s finest and other police agencies around the U.S. are making an effort to get people to download it.

Officers have been spotted handing out fliers near Apple Stores. Jim Rosenberg was given a flier that reads:

As of Wednesday, September 18, 2013 the new iOS 7 feature brings added security to your Apple devices.
● By downloading the new operating system, should your device be lost or stolen it cannot be reporgrammed without an Apple ID and password.
● The download is FREE from Apple.
● For additional information on iOS 7 features visit www.Apple.com.
---

The NYPD has also been posting to Facebook groups and encouraging parents and other users to upgrade their devices.

Check out the handouts below! 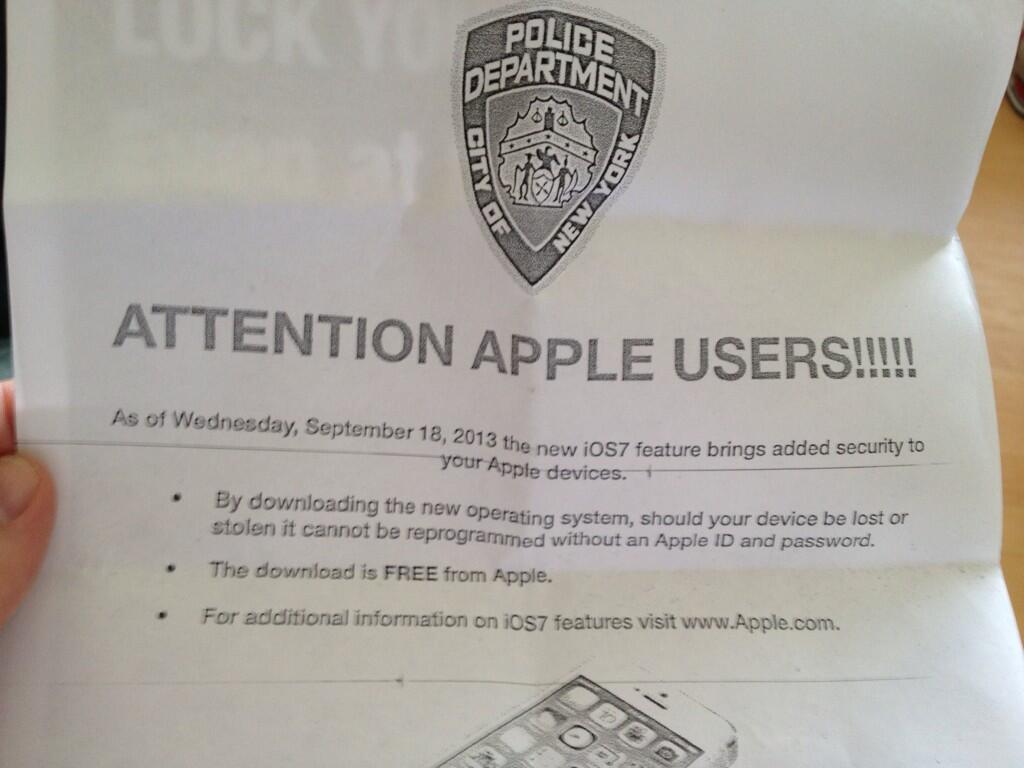 Copperhead - September 22, 2013 at 10:26pm
Someone already bypassed this security and also bypassed the biometrics as well... Apple is going to have to try harder... Maybe put in place with the ISPs verizon, AT&T , sprint and tmobile all have to get together and agree that they will not turn in a device with contacting the owner or previous owner to inquire and to assure that the device has not been stolen... Also put into place that if a owner sells the device he he or she would need to go to a special website created by apple and ISPs and place the proper info within the website... The website would also show that the device is stolen or not... This way service providers will make sure people can't activate devices if it's stolen or not in their name..
Reply · Like · Mark as Spam

iPhone hack - September 23, 2013 at 8:40am
I will never think cellphone providers will make you easier to sell or transfer your old phone to another customer. Remember , that they want you to buy new phones or sign contracts. So forget about they will create a website so you can put or login and transfer your old Iphone .
Reply · Like · Mark as Spam

Joe - September 22, 2013 at 5:46pm
All of you guys are wrong. It doesn't activate, activation lock when you report it stolen. Where did you get that from?? When your phone is stolen, nothing is activated. The thing is when your phone is stolen the thief cannot turn of find my iPhone, erased your iPhone or Reactive your iPhone on any network without first entering the Owner's AppleiD or password. Meaning the phone is unusable without those credentials. You will have to do absolutely NOTHING when your iPhone is stolen. So let say iWanted to give my old iPhone to my sister, iWould have to first turn off Find my iPhone, wipe out the iPhone by entering my AppleiD and password to do both, then she will be able to use her own AppleiD to activate the iPhone.
Reply · Like · Mark as Spam
1

dsadsa - September 22, 2013 at 8:15pm
if stolen, you can activate Lost Mode through your phone's cellular connection which bricks the phone until you put your appleid/password on it. that's the whole story. stop the drama.
Reply · Like · Mark as Spam
9 More Comments
Recent