Apple has updated its homepage to honor the life of Nelson Mandela, who passed away December 5th, 2013. Mandela died of a lung infection in Houghton, Johannesburg at 95 years of age. An official memorial service is set for December 10th and a state funeral is scheduled for December 15th.

--
Nelson Rolihlahla Mandela was a South African anti-apartheid revolutionary, politician and philanthropist who served as President of South Africa from 1994 to 1999. He was the first black South African to hold the office, and the first elected in a fully representative democratic election. His government focused on dismantling the legacy of apartheid through tackling institutionalised racism, poverty and inequality, and fostering racial reconciliation. Politically an African nationalist and democratic socialist, he served as President of the African National Congress (ANC) from 1991 to 1997. Internationally, Mandela was Secretary General of the Non-Aligned Movement from 1998 to 1999. [W]
--

Apple CEO Tim Cook recently tweeted, "Amazing human being. Champion of freedom and human dignity. He set an example for all of the world. RIP Nelson Mandela. We miss you already."

"What counts in life is not the mere fact that we have lived. It is what difference we have made to the lives of others....." Mandela 2002 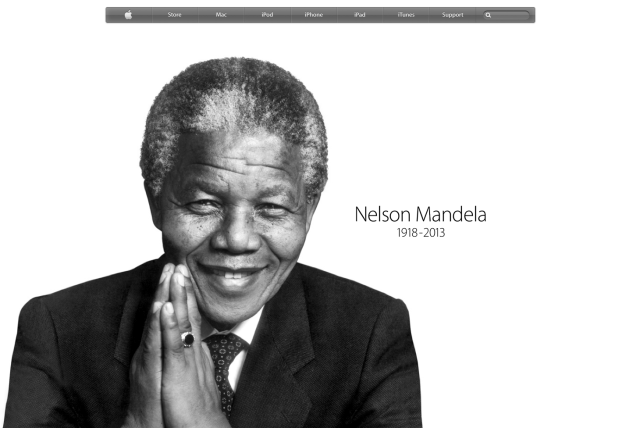 Theif God - December 8, 2013 at 7:42pm
Honestly no one argues over what you prove on, you're like tony with his shit, you may hate him like we all do but you prove nothing sometimes!
Reply · Like · Mark as Spam
0

jj - December 7, 2013 at 10:57pm
Criminal Record of Nelson Mandela * The full list of munitions and charges read as follows: • One count under the South African Suppression of Communism Act No. 44 of 1950, charging that the accused committed acts calculated to further the achievement of the objective of communism; • One count of contravening the South African Criminal Law Act (1953), which prohibits any person from soliciting or receiving any money or articles for the purpose of achieving organized defiance of laws and country; and • Two counts of sabotage, committing or aiding or procuring the commission of the following acts: 1) The further recruitment of persons for instruction and training, both within and outside the Republic of South Africa, in: (a) the preparation, manufacture and use of explosives—for the purpose of committing acts of violence and destruction in the aforesaid Republic, (the preparation and manufacture of explo- sives, according to evidence submitted, included 210,000 hand grenades, 48,000 anti-personnel mines, 1,500 time devices, 144 tons of ammonium nitrate, 21.6 tons of aluminum powder and a ton of black powder); (b) the art of warfare, including guerrilla warfare, and military training generally for the purpose in the aforesaid Republic; (ii) Further acts of violence and destruction, (this includes 193 counts of terrorism committed between 1961 and 1963); (iii) Acts of guerrilla warfare in the aforesaid Republic; (iv) Acts of assistance to military units of foreign countries when involving the aforesaid Republic; (v) Acts of participation in a violent revolution in the aforesaid Republic, whereby the accused, injured, damaged, destroyed, rendered useless or unserviceable, put out of action, obstructed, with or endangered: (a) the health or safety of the public; (b) the maintenance of law and order; (c) the supply and distribution of light, power or fuel; (d) postal, telephone or telegraph installations; (e) the free movement of traffic on land; and (f) the property, movable or immovable, of other persons or of the state. Source: The State v. Nelson Mandela et al, Supreme Court of South Africa, Transvaal Provincial Division, 1963-1964, Indictment.
Reply · Like · Mark as Spam
0

And...? - December 7, 2013 at 11:18pm
It's not really clear what point you're trying to make by posting the list of charges. Listing the actual convictions would be more relevant, but even then you'd have to take them with a grain of salt considering the circumstances, no?
Reply · Like · Mark as Spam
0

PersianBoy - December 7, 2013 at 6:00pm
We haven't forgot that USA listed Mandella in the terrorists wanted list. His name was dismissed in 2008. Its funny that now they are honoring him.
Reply · Like · Mark as Spam
15 More Comments
Recent