Apple is dominating sales at U.S. carriers taking 2 out of 3 of the top three sales slots for the third month in a row, reports Canaccord Genuity via AppleInsider.

The Cupertino, Calif.-based company remained America's top smartphone vendor in November on the back of 'strong' iPhone 5s sales and 'steady' iPhone 5c sales, according to data cited by Canaccord Genuity analyst T. Michael Walkley in a Thursday note to investors. Samsung notched a second-place finish in an industry that has seen major sales consolidation throughout the fourth quarter. 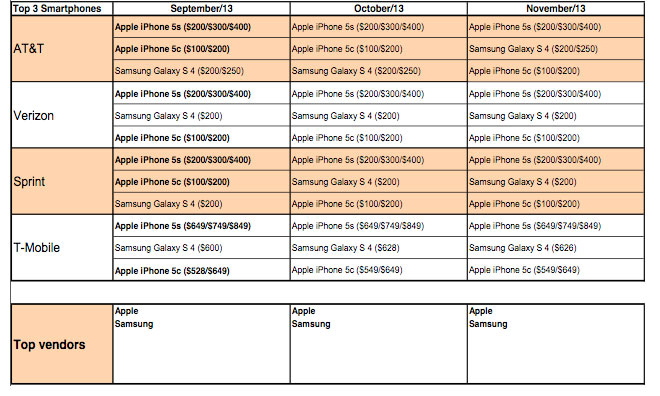 shitHead - December 13, 2013 at 1:41pm
The automobile would not exist without the wheel. What's the relevance of your point to the article?
Reply · Like · Mark as Spam

dickMouth - December 13, 2013 at 11:17pm
It's not realizing what I meant without a brain, so you use it! Since you asked though it means that apple can do anything without Samsung therefore this guy (tony 1st) is wrong!
Reply · Like · Mark as Spam

Tony the 2nd - December 12, 2013 at 11:37pm
Burn galashit! I can see why samsheep innowaits (makes something after one company makes) and pass it down as their own work and still fails, not to mention how samsheeps call their shit 4 the best yet they don't even have a scanner, amber flash, motion coprocessor, or 64 bit architecture! Competitors nowadays=meth!
Reply · Like · Mark as Spam
Recent