Toyota announced on its U.K. blog that support for CarPlay was coming to Toyota vehicles in 2015; however, the announcement was quickly retracted.

The initial article was titled, "Apple CarPlay: Coming soon to a Toyota near you". It read, "Come 2015, you’ll be able to get the iPhone experience you love in your Toyota with Apple CarPlay."

The entire article has since been pulled and replaced with an article entitled, "Apple CarPlay: Toyota joins in-car iOS project" that reads "Apple’s CarPlay software could bring the iPhone experience to future Toyota models."

In addition, a retract message was posted:

It's unclear why Toyota pulled the original announcement as they are already listed by Apple as a committed partner.

In the original article Toyota said, "Details on which Toyota models will be first to get CarPlay compatibility are still to be announced, so stay tuned for more as we get it." 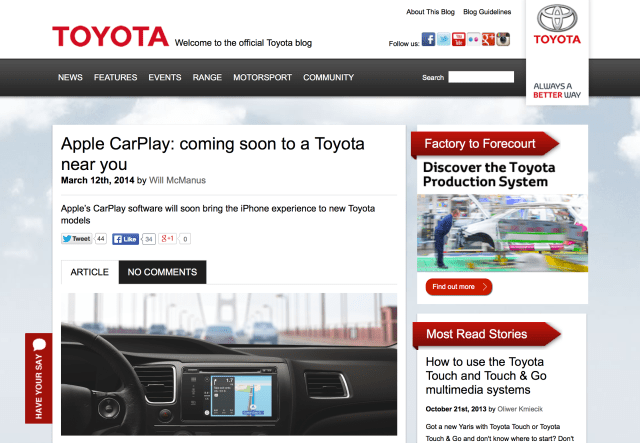 K - March 13, 2014 at 5:46pm
More android myths than iOS. iOS obviously surpassed android, when did others ever succeed?
Reply · Like · Mark as Spam