In its current state the jailbreak is considered super beta and Todesco warns that it could mess up your device and require it be restored.

this is likely (nah not really but pretend it is) to fuck your device up forcing you to restore, so better safe than sorry. wait for stable release

The jailbreak currently supports the iPhone 7 on iOS 10.1.1 but it appears to support the iPhone 6s and iPad Pro on any 10.x firmware. 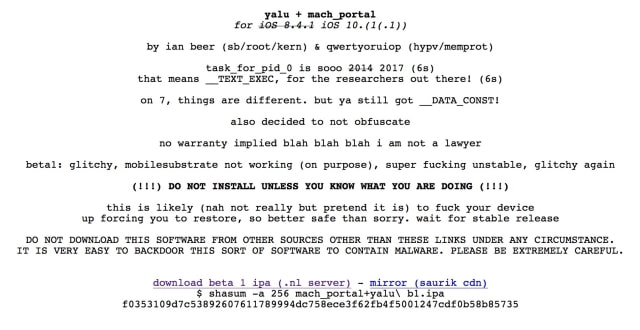 Michael D - March 28, 2017 at 8:35pm
I have an iPhone 7 on iOS 10.1.1 I have been waiting for a stable release jailbreak, however monitoring qwertyoruiop's twitter it appears he isn't going to release anything else. Which version of the Yalu should I use? Beta 4 shows it broken, does beta 3 have the mobile substrate to install third party application and tweaks?
Reply · Like · Mark as Spam