Stanford Medicine announced results of the Apple Heart Study today, the largest ever study of its kind with over 400,000 participants.

Apple and Stanford created the study to evaluate Apple Watch’s irregular rhythm notification, which occasionally checks the heart's rhythm in the background and sends a notification if an irregular heart rhythm appears to be suggestive of atrial fibrillation (AFib). As part of the study, if an irregular heart rhythm was identified, participants received a notification on their Apple Watch and iPhone, a telehealth consultation with a doctor and an electrocardiogram (ECG) patch for additional monitoring.

“We are proud to work with Stanford Medicine as they conduct this important research and look forward to learning more about the impact of Apple Watch alongside the medical community,” said Jeff Williams, Apple’s COO. “We hope consumers will continue to gain useful and actionable information about their heart health through Apple Watch.”

Stanford Medicine researchers presented their findings today at the American College of Cardiology’s 68th Annual Scientific Session and Expo. Study results showed 0.5 percent of the over 400,000 participants received an irregular heart rhythm notification, illustrating the feature’s ability to give a user important health information without creating unnecessary burden to their doctor’s schedule. Many participants sought medical advice following their irregular rhythm notification, using the information to have more meaningful conversations with their doctors.

A notification was received by 2,161 participants (0.52 percent). Notification rates were most frequent in participants over age 65 (slightly >3.0 percent) and lowest among those under 40 (0.16 percent). Patches were sent to 658 participants and 450 were returned and included in the analysis. AFib was identified in 34 percent of those who received a notification and wore the ECG patch.

The positive predictive value (PPV) for the tachogram was 71 percent and the PPV for notification was 84 percent. About half of participants receiving an irregular pulse notification contacted a study doctor. Subsequent surveys showed that 57 percent of participants who received an alert sought medical care outside of the study regardless of whether they had been seen virtually by a study doctor.

“As physicians, we are always trying to find ways to offer patients health information that is meaningful to them for individualized care,” said Sumbul Desai, MD, Apple’s vice president of Health. “Seeing medical research reflect what we’re hearing from consumers is positive and we’re excited to see Apple Watch helping even more consumers in the future while collaborating with the medical community to further research.”

You can learn more about the study at the link below. 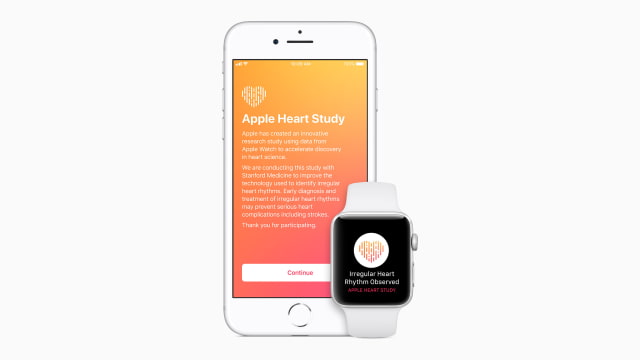