Apple shipped a record 90.1 million smartphones last quarter, according to a new report from IDC. That's the largest number of smartphones ever shipped by a vendor in a single quarter. In total, smartphone makers shipped 385.9 million devices during the quarter, despite an overall 5.9% decline in shipments in 2020.

"There are a lot of elements at play that are fueling the smartphone market recovery – pent-up demand, continued supply push on 5G, aggressive promotions, and the popularity of low to mid-priced phones," said Nabila Popal, research director with IDC's Worldwide Mobile Device Trackers. "Vendors also seem to be better prepared for the second lockdown, ensuring they have the right channel set up ready to fulfill orders and reach the end consumer. Lockdowns also have people spending less on areas like leisure, travel, and dining out – and smartphones are benefitting from this. In addition to all these factors, the fast recovery and resilience of the smartphone supply chain also has to be given some credit."

In terms of vendors, there was a clear shift among the Top 5. Apple delivered a phenomenal performance in 4Q20, returning to the number 1 position with 90.1 million devices shipped, driven by the success of the iPhone 12 series. This represents the highest shipment volume from a vendor in a single quarter and resulted in 23.4% market share and 22.2% year-over-year growth. Samsung moved to number 2 with 73.9 million device shipments and 19.1% market share. With the continued success of the A series and growth in nearly every region, Samsung saw year-over-year growth of 6.2%. Xiaomi finished the quarter in the third position with shipments of 43.3 million and 11.2% market share while OPPO was fourth with shipments of 33.8 million and 8.8% market share. Both companies successfully capitalized on declining Huawei shipments, growing 32.0% and 10.7% year over year respectively, by focusing on aggressive product portfolios and building partnerships. Huawei fell to the number 5 spot with shipments of 32.3 million and 8.4% market share. The company continues to suffer under the weight of U.S. sanctions and saw a dramatic year-over-year decline of 42.4%.

Check out the chart below for more details.... 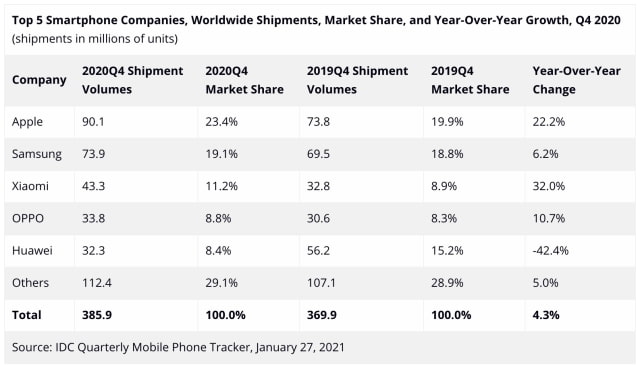