The commercial shows the two devices in side-by-side competition. The two phones race towards pinpointing the phone location. Both are able to locate the phone in approximately the same time; however, the iPhone can only narrow positioning down to a few city blocks. The Instinct is also able to present a 3D view of its results.

The Instinct performs better in this test because of its assisted GPS technology, whereas the iPhone relies on either router information or cellular triangulation. It is expected that the 3G iPhone will have a dedicated GPS receiver, allowing it to not only resolve an accurate location, but do so at a faster speed. 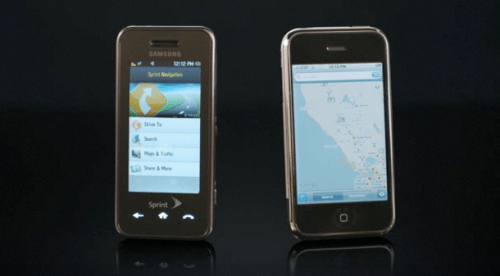