Wired takes an in depth look at the relationship between Apple and AT&T and how it has deteriorated.

Shortly after the iPhone was released in 2007, AT&T began to realize the iPhone customers were demanding data faster then they were building out their network. The company met with Apple asking them to take measures to avert the looming problem; however, Apple wasn't interested in restricting their device to help AT&T look good.

“They tried to have that conversation with us a number of times,” says someone from Apple who was in the meetings. “We consistently said ‘No, we are not going to mess up the consumer experience on the iPhone to make your network tenable.’ They’d always end up saying, ‘We’re going to have to escalate this to senior AT&T executives,’ and we always said, ‘Fine, we’ll escalate it to Steve and see who wins.’ I think history has demonstrated how that turned out.”

As foreseen AT&T's network did fail under the pressure resulting in thousands of frustrated customers. “AT&T went in thinking the deal was a true partnership: ‘We’re in this together, and we defend each other throughout.’ That wasn’t the way Apple did things at all,” says someone who worked on the project for AT&T. “We’d say, ‘Let’s resolve these issues together,’ and they’d say, ‘No, you resolve them. They’re not our problem. They’re your problem.’”

The article continues to describe sources of conflict between the companies. For example when Jobs heard that De la Vega made an announcement about tethering before a deal was in place he “was absolutely livid,” a witness says. “He paced around the room for five minutes talking about what an incredibly stupid company AT&T was and how frustrating it was to do business with them. Then, when he was done, he said, ‘I’m going to go call Ralph and yell at him.’”

The two companies have even fought about wardrobe with an AT&T representative suggesting to one of Jobs’ deputies that the Apple CEO wear a suit to meet with AT&T’s board of directors, he was told, “We’re Apple. We don’t wear suits. We don’t even own suits.”

Wired also talks about the difficulties Apple faces in switching to Verizon and when it might finally happen. The article is a highly recommended read. 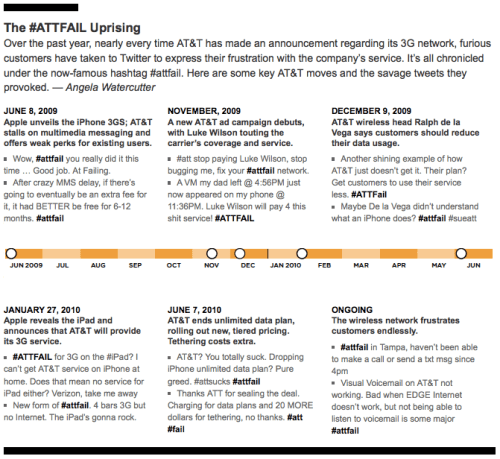 James - July 20, 2010 at 11:16am
I agree completely with the other commenter. There\'s no way that any 1 provider can handle the data usage of the iPhone. Exclusive agreements only piss off customers. The average phone user is at somewhere near 1MB per month. The average smartphone user is under 50MB per month. The average iPhone user is just around 200MB per month. How can the general public not understand that the network can\'t take that??? Apple should have had more restrictions in place for what could use 3G and what required wifi, and pushed the benefits of wifi. Wireless N should have been in it since the 2G, getting customers used to having faster internet when connected to wifi. As far as tethering... Verizon and AT&T are the only true competitors in the US. Both have always charged $30 extra for tethering. The iPhone is $20 extra. Why are people complaining when there\'s a price drop?!?!?!? As far as the data limits... The only people truely affected are those who are abusing the network and taking resources away from other customers. If your using MyWi to replace your home internet with your iPhone, you should be cut off the network and your account should be cancelled. Stop complaining that there\'s a 2GB cap, if your using more than that, learn what wifi is.
Reply · Like · Mark as Spam

Telia - July 20, 2010 at 8:17am
To be fair, AT&T\'s network neglect and poor service reflects an industry-wide attitude problem. When a network providers is relatively young it benefits from few customers and high capacity. However, when it grows and as smartphones develop, capacity becomes stretched and customer service is affected. There are few companies that are expanding their networks to meet future demands, especially today when business growth is bleak and expansion financing is hard to come by. For any change to happen the axe has to fall on executives and managers who haven\'t understood why their business model is unsustainable. An idea I propose is for a regulator to rate the capacity of each providers\' network and only allow X amount of customers for each provider. This could also open up the market for new providers and existing providers would have to forfeit customers until they expanded their network. Also, exclusivity deals should be illegal on the basis that they block price competition on a particular handset.
Reply · Like · Mark as Spam
Recent