SquareTrade analyzed iPhone accidents for over 20,000 iPhone 4s covered by SquareTrade Care Plans and found a 82% increase in reported broken screens compared to the iPhone 3GS.

Interesting Highlights:
● iPhone 4 owners reported 82% more damaged screens in the first 4 months compared to iPhone 3gs owners.
● Overall, the reported accident rate for iPhone 4s was 68% higher than for the iPhone 3gs.
● An estimated 15.5% of iPhone 4 owners will have an accident within a year of buying their phone.

"With just 4 months of data, it's clear that the iPhone 4 is significantly more prone to physical damage than its predecessor. The aluminosilicate glass seem to crack at least as often as the old glass, and there is now twice as much surface area to break.

Despite this troubling increase, it's important to take the accident rate into perspective. Overall, the iPhone is still a very well constructed device, with a non-accident malfunction rate much lower than most other consumer electronics. " 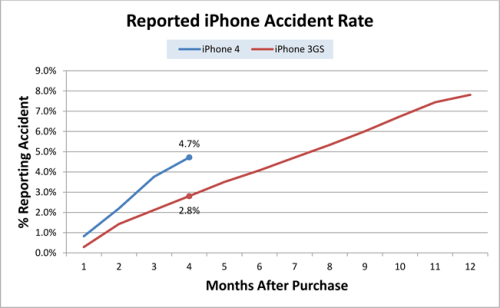 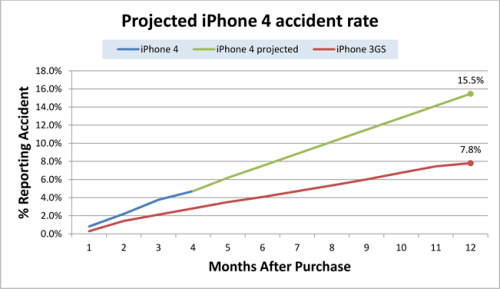 David - October 13, 2010 at 9:49am
First, this data is that of an insurance plan company that stands to benefit from scaring people into believing they need such a plan. As such, it is suspect. Further, the reported percentages are of those people who purchased such a plan. There is an assumption that the demographics haven\'t changed. This may not be true. For instance, what if the more careful owners of a 3GS insurance plan realized they\'d gotten nothing out of it and decided not to buy the insurance again the next time around with their iPhone 4. This leaves the more accident-prone folks buying insurance plans, forcing up the percentage of claims. I\'m not saying this is the case. However, the data is far from unambiguous.
Reply · Like · Mark as Spam

Andrew - October 13, 2010 at 6:06am
^ Rubbish, its not any more uncomfortable to hold than any other smart phone. The problem with the Iphone4 is the oil coating is on both sides making the phone much more likely to slide off furniture, dashboards, carriers, handbags and not because people are experiencing RSI when using the device.
Reply · Like · Mark as Spam

jompao - October 13, 2010 at 5:35am
Duh.. not very strange is it, iPhone 4 has glass on both sides so when dropped chanses are greater it falls on the glass side.. I use Bodyguards on my iPhone 4 for some protection and very good grip without making it more bulky. Bodyguards is the only one I find works well to use with the finger, it is almost as smooth as the glass when operating.
Reply · Like · Mark as Spam

Tony - October 13, 2010 at 2:48am
I had my iphone 4.0 less than 24hrs and the glass broke while the phone was in my pocket - 210 to repair!. Simply put, this design as pretty as it is, is not robust enough to withstand normal usage as a phone... It is a great device but a terrible phone.
Reply · Like · Mark as Spam
3 More Comments
Recent