Steve Jobs has replied to an iPad customer concerned over a recent rumor that AirPrint support has been pulled from Mac OS X and Windows.

-----
As a release-day purchaser of an iPad, I was elated when you revealed iOS 4.2 would support AirPrint. Now comes reports AirPrint support has been pulled from 4.2. Between announcements/assurances of the white iPhone, and now the pulling of AirPrint, is Apple going to lose credibility and become known for announcing "vaporware"?
-----

AirPrint has not been pulled. Don't believe everything you read.

Unfortunately, Jobs' response doesn't shed any light on the validity of the rumor. The person who sent the email was mistakenly under the impression that AirPrint was removed from iOS 4.2. This was never suggested. Rather it's support for AirPrint from Mac OS X and Windows that may have been dropped for the present. 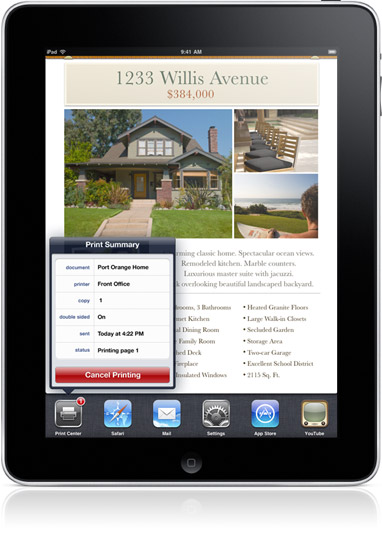