Apple retail stores have begun receiving unidentified shipments as well as new signage for Monday, according to a Crunchgear report.

"We have received word that Apple retail stores have received unidentified shipments, as well as new signage, slated to go up on Monday. The London Regent Street Apple Store has received a single box that is padlocked, and under orders to be put in a safe until Monday. "Just one box?" I asked. Yep, just one... at this particular store, anyway."

This report is very similar to one we posted a few days ago about Apple resellers in Australia who received a mystery box. 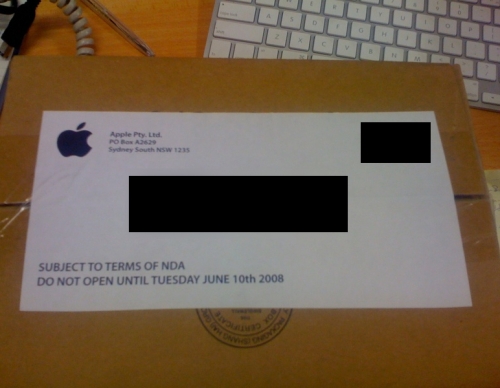 Amused - June 8, 2008 at 3:41pm
Why Just one poackage in UK? I hope they release it in UK at the same time as in USA. UK people tend to wait for a while and they end up paying more due to currency exchange rate. If Apple releases iphone later in UK, im switchign to some other phone (samsung toca seems similar to an iphone, and lot lot cheaper)
Reply · Like · Mark as Spam
0