Gap has confirmed that they are testing a new PoS system from Apple at a few of their Old Navy stores, according to a 9to5Mac report.

The Apple PoS system prints customer’s receipts wirelessly to stationed printers throughout the retail stores (like at Apple stores) and apparently some employees are wearing mini-printers on their belts. According to some Old Navy employees the Apple POS system is perfect for the holiday sales rush as the device’s portability cuts down lines and is simply more efficient for everyone.

I can confirm that we are piloting Apple's iPod based POS system at a few of our Old Navy stores.

Apple's system was detailed back in November of 2009 by AppleInsider:

Apple's solution consists of a hard plastic, two-piece slip-on shell with a grip texture. The magstripe reader is tucked onto the back of the shell, and the barcode scanner is installed within the top of the device. Hidden inside the shell is a rechargeable battery to power the card reader and scanner. A set of four tiny lights on the back indicate the unit's state of battery charge.

Buttons on the side of the device connect through to the iPod touch, including the sleep and volume controls. A mini-USB connector connects to an AC battery charger. A large squeeze-button on the right side momentarily activates the barcode scanner. 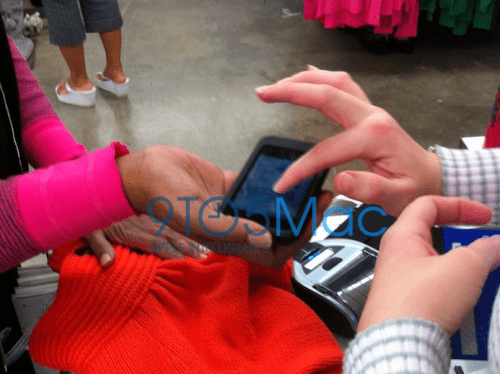 bill - December 2, 2010 at 8:02am
I wont feel comfortable entering my credit card pin code into iphone screen. guess why because 1. its wireless device. 2. I have worked on keyloggers and they are very easy to install on iphones to steal someones information. Iphone is least secure device for POS system.
Reply · Like · Mark as Spam

ricky - December 2, 2010 at 10:15am
dont put atm just use credit and sing and it looks u never been to a apple store thats the way u buy there
Reply · Like · Mark as Spam

can berk - December 2, 2010 at 8:25pm
what about giving your credit card to the waitress at the restaurant huh? can\'t she write down all the info (card number, cvv2, exp. date) and use them??
Reply · Like · Mark as Spam
Recent