Google has asked manufacturers to delay their launches of Google TV so that it can improve the product after it received lukewarm reviews, according to the New York Times.

Although Google already has a deal with Sony for its Internet TVs, other television makers — Toshiba, LG Electronics and Sharp — were prepared to flaunt their versions of the systems.

But Google has asked the TV makers to delay their introductions, according to people familiar with the company’s plans, so that it can refine the software, which has received a lukewarm reception. The late request caught some of the manufacturers off guard.

The NYT notes that Google has faced the same situation with its launch of Android for tablets and ChromeOS for netbooks. 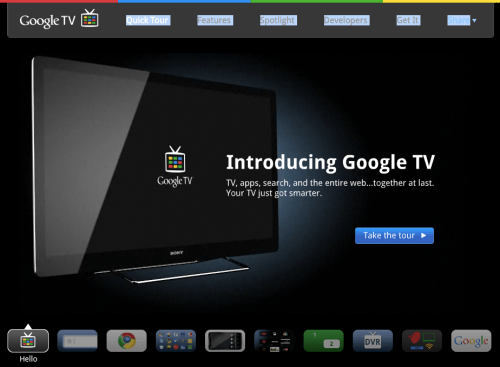 mat - December 20, 2010 at 2:17pm
it is more complicated, they just have bad people with no engineering nor design skills chasing short term goals. There is no technological culture not only in Google. This is what you get from freshly educated students from poor countries. No vision, no attention to detail, no perfectionists. And this is not only Google, the fact iPhone looks better is pure coincidence.
Reply · Like · Mark as Spam

Tom - December 20, 2010 at 12:08pm
It probably has something to do with Google\'s lack of taste. They\'re so anxious to get their hand in any/every market possible that they don\'t spend the time refining their product to have any sort of quality to it. I\'ve recently switched to and HTC Desire from my iPhone 4, so I\'m speaking from experience. I\'ve used HTC Sense UI and stock. Stock is atrocious, and Sense UI is a bit better. But google really needs to understand that the end-user experience is actually of importance to their products. The android market is still a product that should not be open for public consumption. And they would likely benefit from some hardware standards (like how WP7 devices all have the same 3 buttons on the bottom). New rule for Google - before every new product you have to do this: \"Hmmm, is this gonna look like we just crammed a ton of crap into one place or is it going to look elegant?\" More often than not with Google the offering is the former.
Reply · Like · Mark as Spam
Recent