Mozilla developer Matt Brubeck comments on whether Firefox Mobile ever be released for iOS devices on Quora.com saying,

"We have no plans to release the full Firefox browser for Apple iOS devices. The current iOS SDK agreement forbids apps like Firefox that include their own compilers and interpreters.

Other browsers for iOS use the built-in WebKit libraries (like Skyfire) or do not execute any JavaScript on the device itself (like Opera Mini, which uses a proxy server). Mozilla could create a browser that did one of those things, but it wouldn't be related to Firefox in any way.

It's technically possible to port Firefox to iOS, and some people have done some work on that in their spare time. But unless Apple removes these restrictions, Mozilla will not spend time and money on this project. The development would likely violate the SDK agreement, and it would not be distributable to non-jailbreak iOS users."

This has pretty much been the standard Mozilla response; however, its interesting to note that some work has been done on the port. Currently, Mozilla's only presence on the iPhone is Firefox Home, an app which provides access to your desktop history, bookmarks, and open tabs. 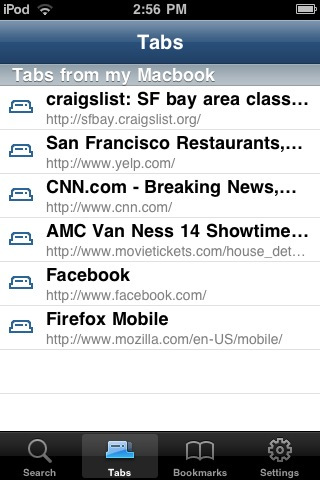 Leonick - December 28, 2010 at 5:50am
Just gonna say this, I don\'t care if it runs webkit or gecko, at least not on my iOS device, give me a complete web browser that can sync with Firefox that\'s all that\'s needed. Firefox Home is nice but it\'s not a browser...
Reply · Like · Mark as Spam
Recent