According to numerous complaints on twitter, it seems that the iPhone's alarm clock will not function properly come New Year's Day. This particular glitch in the iOS software will affect all users who use the alarm clock without recurring alarms. According to 9to5mac, the glitch will fix itself on January 3rd. You may recall a similar bug in the iOS software which was later on fixed in iOS 4.2.1.

For now, make sure to set all your alarm clock to reoccur, or repeat on the days you want it to. This bug is present in 4.2.1 and earlier versions of iOS 4.

Update: Apple has responded to this issue

We're aware of an issue related to non repeating alarms set for January 1 or 2. Customers can set recurring alarms for those dates and all alarms will work properly beginning January 3. 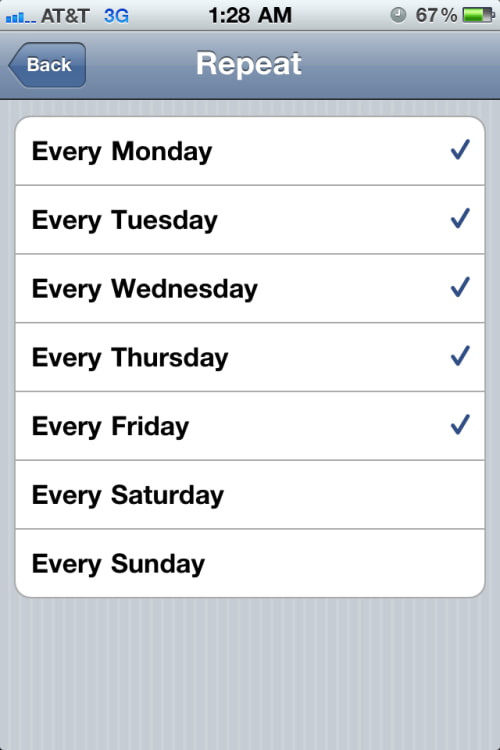 unklbyl - January 2, 2011 at 12:34pm
FIX that problem by manually setting your iphone 4 to 4th of Jan, then the alarm works! I have NO repeating alarms on either of my iphone 4\'s. life is just too irregular!
Reply · Like · Mark as Spam

HO - January 1, 2011 at 10:32pm
...oh mapple...anyway, there has to be a mix of elements to make this bug kick in, I just tested my alarm and didn\'t have any issues but then again I believe it has to do with the applications ur running, it\'s obvious anyway that is bad coding!
Reply · Like · Mark as Spam

Jonah - January 2, 2011 at 1:17am
Is your alarm set to go off every day of the week including weekends? because the glitch did not occur to me and i was surprised. Then I went to the alarm app, played around with it, and found out that the glitch only happens when not all of the days are checked off but if all are checked then for some reason the alarm foes off.
Reply · Like · Mark as Spam