AT&T is reportedly going to introduce new text messaging plans on January 23rd, according to GearLive.

The leaked screenshot below, obtained from Best Buy, shows that AT&T will discontinue its current $5/200 and $15/1500 plans and introduce two news ones. 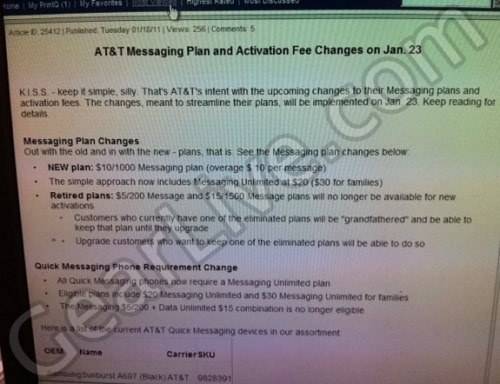 Alex - January 19, 2011 at 7:55pm
You\'re all fucking nuts! You shouldn\'t have to pay AT ALL for a text plan if you have minutes as text messages run on the same data stream as voice calls! That said, if they want to charge you for it AT ALL, then they should include text messages in your data plan, NOT in addition to your data plan. You\'re all retards for still buying in to this crap when other carriers include it for free. They changed all this when the iPhone came out and forced everyone into it. It\'s a sad shame and I wish there was a class action lawsuit against all carriers that still charge for texts that I could join. They only charge us because we let them. We didn\'t have to pay for texts in the past and many carriers still don\'t charge if you have unlimited voice, something many people forget. AT&T just shoves it down our throats. In fact, at one point AT&T made a smart marketing move and started to shove text plans down our throats by increasing the cost of individual text messages up to $0.20 cents. Another fact; you can\'t decline a text message the way you can a voice call and you WILL be charged for receiving that text unless you block text messages entirely from your contract and texting is turned on for every contract by default (much like spam). AT&T also tried to fuck over all of their original customers who had this specific plan that was costing AT&T millions so to get out of it, they sold their wireless service to Cingular who then gradually turned them over time to new plans as they they\'re original AT&T contracts no longer held any weight and then sold the service back to AT&T (or should I say AT&T bought it back). Here is a company that runs much like the automobile industry in America trying to squeeze every last cent out of it\'s customers on outdated technology until they have no choice but to upgrade their products and services (but not to current technological standards met globally) to hold off customers from switching to other companies.
Reply · Like · Mark as Spam

Kingsford - January 19, 2011 at 3:38pm
I dont see why Carriers dont just make 1 messaging plan and it\'s unlimited. $20 for Unlimited is still horrible. They should consider dropping that to say $10-15 range. Then maybe it will help some people stay with AT&T. As for me.... Off to Verizon I go (They give better government discounts).
Reply · Like · Mark as Spam