Netgear CEO Patrick Lo launched a scathing attack on Apple and Steve Jobs at a lunch in Sydney today, according to the Sydney Morning Herald.

Lo criticized Apple's closed system and said that once Steve Jobs is gone the company will have to open its platform.

"Once Steve Jobs goes away, which is probably not far away, then Apple will have to make a strategic decision on whether to open up the platform," said Lo.

"Ultimately a closed system just can't go that far ... If they continue to close it and let Android continue to creep up then it's pretty difficult as I see it."

Lo points to Betamax versus VHS, Mac versus Windows, and proprietary networking protocols versus TCP/IP as examples of where openness has triumphed.

"Right now the closed platform has been successful for Apple because they've been so far ahead as thought leaders because of Steve Jobs," said Lo.

"Eventually they've got to find a way to open up iTunes without giving too much away on their revenue generation model."

Lo says content providers are worried that if Steve Jobs controls distribution channels he will demand a random to deliver their content.

"Steve Jobs wants to suffocate the distribution so even though he doesn't own the content he could basically demand a ransom," he said.

Lo also claimed that Jobs' only reason to trash Flash is his ego.

"What's the reason for him to trash Flash? There's no reason other than ego," he said.

When asked if he had relayed any of his concerns about Apple's closed platform to Jobs, Lo said: "Steve Jobs doesn't give me a minute!" 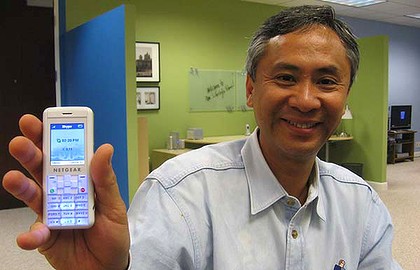 Solution - January 31, 2011 at 12:37pm
That is why any product from Apple has a production status and any product that uses Android has a \"project\" or \"in development\" state. Still a project, after 3 years and always Linux-based system was.. Always a project and never a finished product.
Reply · Like · Mark as Spam

Hash - January 31, 2011 at 4:07pm
Yeah right... Apple lets the user beta-test everyone of their products... and then makes a newer \"corrected\" version rendering the original quickly obsolete... But then again, I\'m a sucker and keep buyin\' them
Reply · Like · Mark as Spam

sulaiman - January 31, 2011 at 12:15pm
and now he wanted to show us this mobile in his hand ?? some body plzzzzzzzzzzzzzzzzzzzzzz tell me he is joking if not plzz mr Lo keep ur system or unit or what ever u r holding in ur hand as close as u can
Reply · Like · Mark as Spam

GG - January 31, 2011 at 10:26pm
Wow dude really? Hearing that\'s a wifi skype phone just makes that worse! Who needs that? Any phone can do that stupid sht smh
Reply · Like · Mark as Spam
7 More Comments
Recent