OWC has discovered that a 'secret' firmware update has enabled access to 8GB of RAM on late '08 MacBooks.

In late 2009, an EFI Firmware Update was released to address the buzzing noises coming from the optical drive. However, it seems that somewhere along the line, Apple changed this update without notating it anywhere.

Whether any other elements were affected by this change is undetermined, but it did change memory addressing; with the later version of the update installed, you could address a full 8GB in Snow Leopard. Unfortunately, Software Update doesn’t show this version as being different from the previous one, so users wouldn’t be notified if they had already updated their firmware to the older version.

Check your BootROM version in System Profiler and make sure its MBP51.007E.B05 for MacBook Pros and MB51.007D.B03 for MacBooks.

Finally, make sure you are on Snow Leopard 10.6.6 then upgrade your RAM to 8GB. I'll be doing this first thing tomorrow morning! 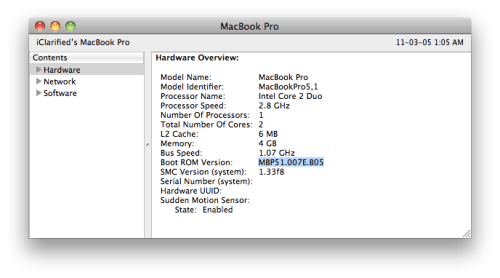 Daniel - March 7, 2011 at 1:37pm
Saw this post today. Im currently running 2x2GB DDR2 (4 GB total) on my Old Mac Book Pro Core 2 Duo (Silver Keys). Wont let me do the update as it says i dont need it. My bootroom version is MBP41.00C1.B03. So i went to my local computer store today and figured it try my luck...they only had one one 4gb DDR2 chip in stock so i bought it anyways and ordered the second to arrive next week sometime....Happy to say I just put the one 4gb chip along with one of my old 2gb for a total of 6gb and System Profiler is recognizing all 6gb no problem!!!! Computer is considerably faster. Will keep you all posted when i drop the other 4gb in next week for a total of 8!!! YEEEEHAAAAA!!!!
Reply · Like · Mark as Spam

Daniel - March 7, 2011 at 3:10pm
Ok...update....just had my first crash....screen and mouse froze after about two hours of running normally, browsing, watching videos, music, etc. The computer also got quite hot just before the crash so im guessing the processors were working their asses off.... Restarted the computer and everything is fine again. Im guessing the RAM did it but not sure.
Reply · Like · Mark as Spam

Gustavo Albornoz - March 6, 2011 at 1:41pm
Please, a tutorial would be great, I\'m trying to update, but i\'m getting a message,\"this computer does not need this update\"
Reply · Like · Mark as Spam
31 More Comments
Recent