AT&T and Deutsche Telekom AG today announced that they have entered into a definitive agreement under which AT&T will acquire T-Mobile USA from Deutsche Telekom in a cash-and-stock transaction currently valued at approximately $39 billion. This will bring the combined user base to 130 million leaving AT&T to be the only national carrier GSM in the US.

With this transaction, AT&T commits to a significant expansion of robust 4G LTE (Long Term Evolution) deployment to 95 percent of the U.S. population to reach an additional 46.5 million Americans beyond current plans – including rural communities and small towns. This helps achieve the Federal Communications Commission (FCC) and President Obama's goals to connect "every part of America to the digital age." T-Mobile USA does not have a clear path to delivering LTE.

As part of the transaction, Deutsche Telekom will receive an equity stake in AT&T that, based on the terms of the agreement, would give Deutsche Telekom an ownership interest in AT&T of approximately 8 percent. A Deutsche Telekom representative will join the AT&T Board of Directors.

On Monday, March 21, 2011, at 8 a.m. ET, AT&T Inc. will host a live video and audio webcast presentation regarding its announcement to acquire T-Mobile USA. Links to the webcast and accompanying documents will be available on AT&T's Investor Relations website. 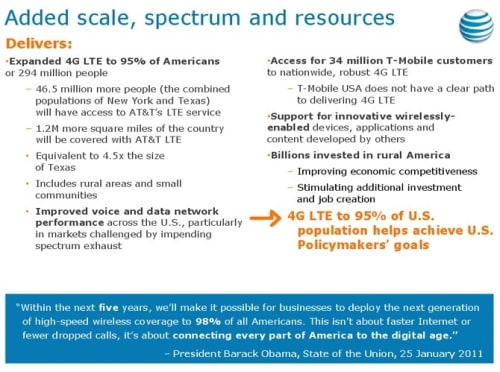 iceblu121 - March 21, 2011 at 10:50am
so is this good news for us att customers? does this mean we will be able to fill in those dead spots picking up t mobiles towers? is this good for us? so there will be no more T MOBILE? is that correct?
Reply · Like · Mark as Spam

Gsauce - March 21, 2011 at 1:24am
So I have an iPhone 4 iOS 4.1 with Tmobile. I have the 10 dollar edge Internet plan that I am perfectly content with. What would change in my phone with this merging?? Would I no longer have to worry about a software unlock? Would I be able to Just use my iPhone by getting a new sim card??
Reply · Like · Mark as Spam

kentwang - March 21, 2011 at 1:04am
This is bad! If T mobile wasnot bought by AT&T, Sprint bought it would be good, then att and tmobile will sell lock iphone, that\'s ok, but Apple will sell unlock iphone like Canada. but now there is no competition, US wouldnot have to carry unlocked iphone. But who know? may be all iphone will be unlocked so they will sell more phone.
Reply · Like · Mark as Spam

afadf - March 20, 2011 at 10:19pm
Is T-Mobile USA getting the iPhone? T-Mobile USA remains an independent company. The acquisition is expected to be completed in approximately 12 months. We do not offer the iPhone. We offer cutting edge devices like the Samsung Galaxy S 4G and coming soon our new Sidekick 4G. From TMO website
Reply · Like · Mark as Spam
11 More Comments
Recent