Apple has reportedly put a freeze on Best Buy iPad 2 sales due to mishandling by the electronics retailer.

According to a CrunchGear tipster, Best Buy was holding off on selling the iPad 2s it had in stock, telling customers there weren't any when in fact they had just reached their quota of sales for the day. Their source says Tim Cook is currently in negotiations with Best Buy over the matter.

Separately, TUAW reports that a reader tipped them of the freeze as well. He claims that until further notice, the mammoth electronics retailer has had all stock except demo units pulled.

Let us know if you've heard anything to corroborate these reports.

Update:
A 9to5Mac reader who claims to work at a "fairly large" Best Buy in the Southeast reports:

I handle pretty much everything Apple related in our sales department including inventory, training, and keeping up with the latest Apple news. Yesterday we received a small shipment of iPad 2's, and as soon as they were brought out to the sales floor my supervisor told me that we could not sale them. I asked him why and he said that the managers received an internal email saying that we were to hold any available iPad 2's and were not allowed to sell them. We were also instructed to tell customers that we were out of stock and not to mention anything to customers about the inventory we were holding. No one really had an explanation as to why, so we locked them up in the warehouse until we hear more from upper management. 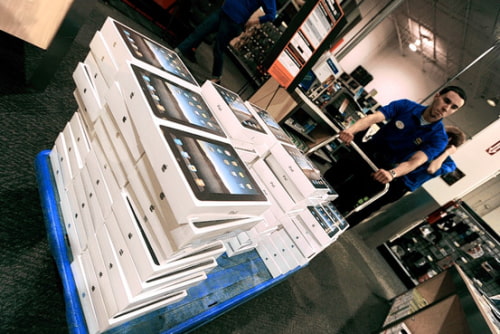 Ha - April 8, 2011 at 11:45am
I was at three different apple stores. They open their doors earlier than the mall to sell a small amount of iPads. Am I supposed to assume they get a delivery every single morning including Sunday\'s?
Reply · Like · Mark as Spam

Tunger - April 8, 2011 at 11:51am
You don\'t need to assume anything, but in fact, Apple stores are getting frequent, if not almost daily shipments. They are not artificially limiting sales.
Reply · Like · Mark as Spam

Pineapple - April 8, 2011 at 2:59pm
Apple stores get deliveries everyday except for Sunday and Monday. And that is because there is no shipments sent out from distribution on Saturday or Sunday.
Reply · Like · Mark as Spam

Russell - April 8, 2011 at 9:59am
They should be able to sell it any way they please. Selling it as it trickles in or holding it for a huge weekend sale. Don\'t let Apple dictate it.
Reply · Like · Mark as Spam

Tunger - April 8, 2011 at 10:10am
That\'s ridiculous. This is a business agreement, not government intervention in how a business conducts itself. Apple has a very specific business model, and they have a negotiated agreement with Best But as a reseller in order to maintain the integrity of that business model. BestBuy, if the rumor is true, did not honor that agreement by withholding stock. It\'s very simple. This isn\'t a matter of control or anyone dictating how another business operates. It\'s about honoring a negotiated contract that was entered into willfully by both companies.
Reply · Like · Mark as Spam
8 More Comments
Recent