CutYourSim, has discontinued its 'legit' iPhone unlock service after being informed that its suppliers were no longer able to perform any additional unlocks.

"Unfortunately, we were not able to complete the rest of the unlocks waiting in our queue due to our suppliers being unable to offer the service anymore," CutYourSim told Cult of Mac. "Our suppliers have told us that there is a possibility that the service may return, but they do not know when, so we have decided to start processing refunds for any orders that we were not able to complete."

CutYourSim managed to find someone to whitelist IMEIs the same way a 'legit' unlock by Apple would be performed. It's thought that Apple managed to figure out how these IMEIs were being whitelisted and put an end to the practice.

"To tell you the truth, first our supplier told us there were server issues, then after that they just told us that they will not be offering the service anymore. We are not sure where the service comes from, or whether it’s a contact through AT&T or Apple. We do know that the service is performed in the UK, but that’s about it." 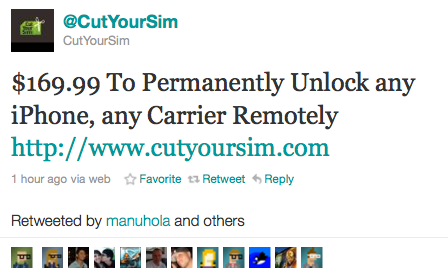 omielgato - April 22, 2011 at 5:00pm
I know from a thrust source some developer have the ability o permission to unlock until 200 phones with the imei.... i thing it was the deal someone developer offer to this inc. unlock iphones for a $$$ and his quote ended.!
Reply · Like · Mark as Spam

Sean - April 22, 2011 at 3:50pm
Way to make a quick buck.. Of course the unlocks came from the UK i got mine unlocked for FREE from my UK network. Just some one exploiting the same system that the networks use with apple uk to get them unlocked.
Reply · Like · Mark as Spam
8 More Comments
Recent