Steve Jobs was recently photographed heading in to work at Apple's headquarters in Cupertino.

iPhoneItalia visitors Silvia and David were visiting the Apple campus on April 25th when they saw a black luxury car stop at the entrance. To their surprise Steve Jobs exited the vehicle. He wasn't driving.

Silvia and Daniel recognize him and approach him asking to have their photo taken with him, but Steve Jobs did not stop and his answer was succinct, "It is not the case, then I have people waiting for me for a meeting."

Steve Jobs is on a medical leave of absence from Apple but remains CEO and is involved in major strategic decisions. It's good to know he remains healthy enough to attend meetings at Apple HQ. 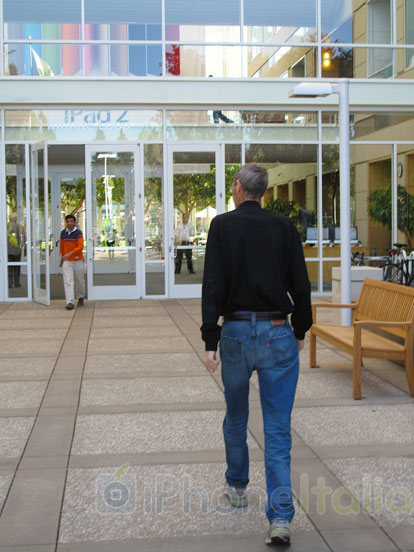 Johndoe - May 5, 2011 at 10:16pm
Exactly! Who give a shit! He wears whatever he feels comfortable as long as it\'s not dirty or stinky. Yeah, those 2 persons probably have no life!
Reply · Like · Mark as Spam

DacksMac - May 3, 2011 at 11:50pm
Wow Mr Boston, be careful cause writing on ur iPad or iPhone screen will totally void ur warranty. I would hate for you to get ur stuff messed up like that and not be able to be replaced. Justs a heads up.
Reply · Like · Mark as Spam
19 More Comments
Recent