Amazon's Cloud Player has suddenly begun to work on iOS devices, according to a TechCrunch report.

If you visit Amazon's Cloud Player through the Safari web browser on an iOS device, you'll see that it does in fact now work. You'll first hit a warning page telling you that your browser is not supported, but just ignore that. Click into the music in your drive and it will begin playing. It works flawlessly — even to the point where if you get a Push Notification or incoming call, the music will be paused.

When Amazon first launched the player they specifically noted that it was only supported by PCs and Android devices. While Amazon has managed to be the first large player to launch a cloud based player, Apple and Google are planning to launch similar services shortly. 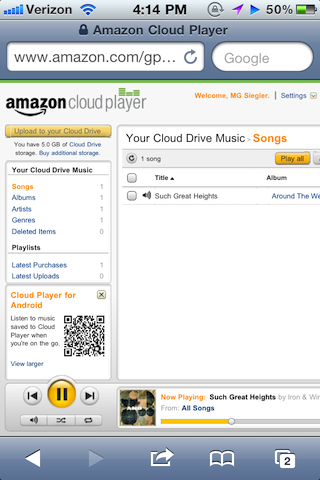 ninocolato - May 9, 2011 at 10:01am
this is actually pretty cool, i just tried it on my iphone 4 and it works perfectly, i got a free song to try it out first of course lol..... theyll probably fix it and no more iphone 4 plays once theyve found out it works for an apple product. the clouds a pretty good idea but to tell u the truth i rather use my mb\'s in other things, i do only have 2 gigs to spare u know. unless i had a higher data limit plan i wouldnt see myself using apples cloud..... peace!
Reply · Like · Mark as Spam
Recent