A rogue anti-malware program called MACDefender is reportedly starting to spread and may now account for 50% of AppleCare support calls, according to a ZDNet report.

Ed Bott from ZDNet was recently criticized by Daring Fireball's John Gruber for his warnings that serious malware is coming to the Mac. Bott has since managed get an interview with an AppleCare support representative who states the situation is dire.

There's usually about 600 or so of us spread around 14 centers for CPU support. Before this started happening, we had 7-12 minutes between calls generally. Now we're lucky to have any time between calls.

We started getting a trickle of calls a couple weeks ago. However, this last week over 50% of our calls have been about it. In two days last week I personally took 60 calls that referred to Mac Defender.

The support representation says that Apple has instructed them not to help customers calling with the malware problem but instead to direct them to various anti-virus companies that offer a solution. The reason being that while MACDefender may be easy to remove, Apple doesn't want to establish the precedent that they will be able to provide this type of support in the future. The representative says some representatives do assist customers at their own risk.

Botts notes that there are 200 discussion threads on Apple's support forums regarding this issue since April 30th, 43 of which were started last weekend. 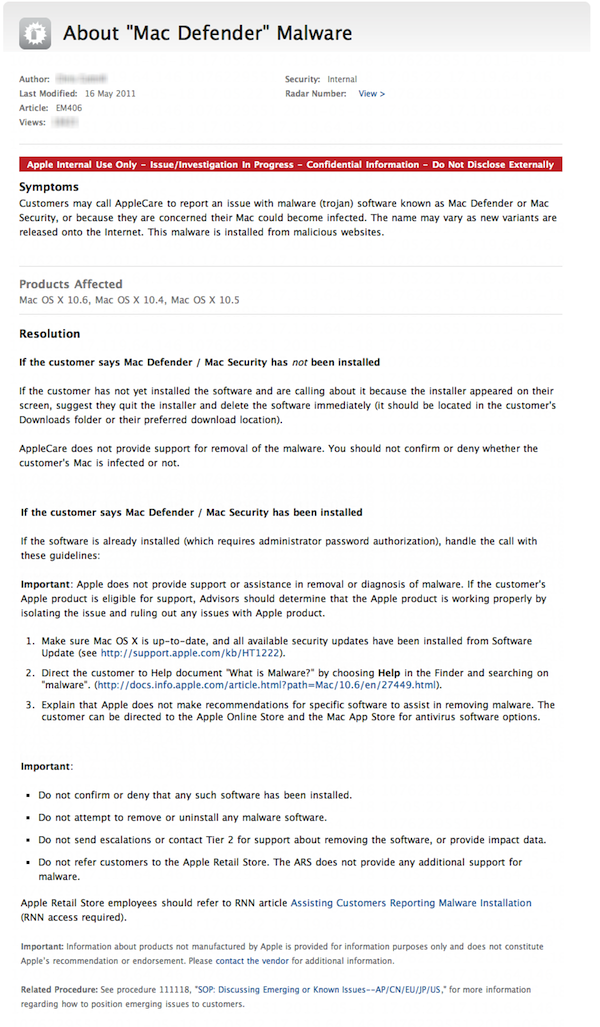 krisss - May 23, 2011 at 4:23am
What a bunch of arrogant pricks! I\'ve had a mac since the early 90\'s. That gives me 20 years of virus free computing. And if viruses come to the mac, it\'s not something to be happy with. If you\'re so happy with your system, there is nothing to be jealous about, is it? So, anyone reacting this way is just a jealous windows/ubuntu-user who wish he had a mac. And let me tell you, I\'ve not always been pleased with what Apple does, but this is what we get. And if we don\'t like it we can still switch, there are alternatives (and they all have their pro\'s and cons.)
Reply · Like · Mark as Spam

Assman - May 20, 2011 at 10:59pm
Few years ago I bought top of the line mac for a friend of a family (he\'s in mid 80\'s, first computer). I hate apple, they are a bunch of liberal faggots but I bought it for him because he\'s a complete novice and at the time malware for mac was not that common. Anyways, two days ago I bumped into him on the street and told me he got a virus. Now I read this memo, made my day. Should have pressed him for windows (with sandboxie et al) or get a cheap-ass laptop for $400 and put ubuntu on it.
Reply · Like · Mark as Spam

thebasa - May 19, 2011 at 7:03pm
wow all the mac users who rallied for years behind the belief that macs can\'t get viruses were really just all \'tards after all.
Reply · Like · Mark as Spam
Recent