Samsung has filed a motion requesting the court force Apple to provide it with the upcoming iPhone 4S/5 and iPad 3, according to TNW.

This motion comes after a judge ruled that Samsung must hand over the Samsung Galaxy S 2, Galaxy Tab 8.9 and Galaxy Tab 10.1, Infuse 4G and Droid Charge devices to Apple's legal team.

Samsung says it needs access to the next generation iPhone and iPad as well as their packaging and inserts "in order to prepare its defense against any preliminary injunction motion brought against Samsung by Apple for trademark or trade dress infringement".

It's unclear if Samsung will be successful in this motion since it's Apple suing Samsung for copying its device, Apple has not announced the existence of an iPhone 4S/5 or iPad 3, and Apple hasn't given any indication that it will file for that preliminary injunction. 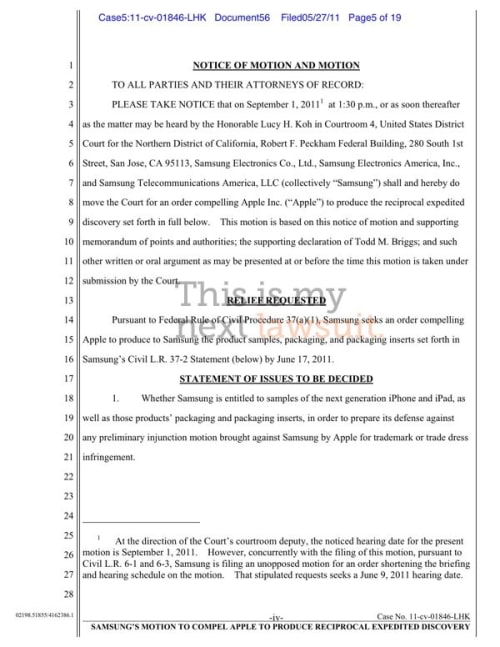 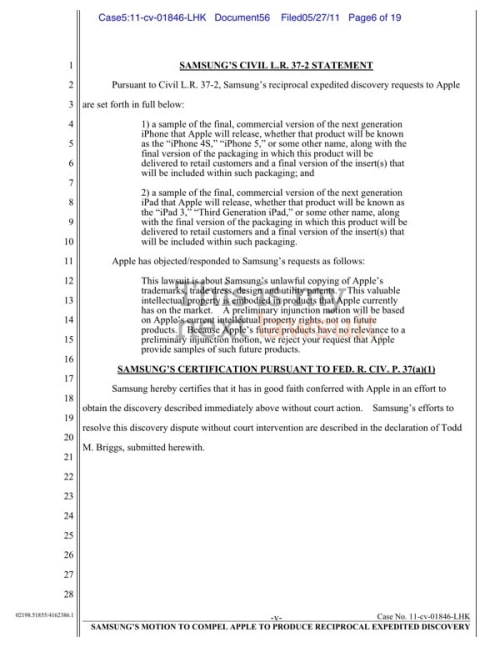 Coose - June 3, 2011 at 12:42pm
All of you that thing Samsung is undeserving of this or should leave apple alone are the epitome what what a brain washed loser in a cult are like. Samsung is playing the same game that Apple is. In the court system that\'s all you can do - fight fire with fire. Fuck Apple. I\'m getting so tired of their BS. First you over charge us then you sue anyone that attempts to compete with you so you can keep overcharging us. I say enough with Apple. I have many apple products (MacBook Air, iPods, iPhones, iPad). I\'ve never really been completely satisfied and maybe it\'s time for me to cut the chord and move on.
Reply · Like · Mark as Spam

Baxter - June 3, 2011 at 6:50pm
I\'m with you. No denying that Apple makes good products but no way I\'m using an iPhone when I have to be tied to garbage iTunes app plus the \"I\'m superior\" attitude of Applephiles. My cheap android phone does everything my Jailbroken 3GS did and connects to my PC & PS3 over USB as mass storage to play videos & music without a blink. Apple\'s closed-minded attitude will cause its decline just like it did in the 80\'s as more open systems become more appealing. So much for learning from history.
Reply · Like · Mark as Spam

CyberTronMicrosolution.Inc - May 29, 2011 at 8:51pm
Please Wait And See What is Going to Happen With Apple Really Soon. We are filing the largest lawsuit against Apple for stealing and falsifying Original 1 st iPhone blueprints from CyberTronMicrosolution.Inc the company in japan that has the original blueprints and all detailed parts already filed back in 1995 with international trademark office. Let it get bigger and richer so we can get more ... Unknow ...
Reply · Like · Mark as Spam

Unknoown Dontcare - June 2, 2011 at 5:01am
your just gay. quit your shit talking cuz thats never gonna happen. all you want is money. so shut the fuck up and leave apple alone.
Reply · Like · Mark as Spam
8 More Comments
Recent