Lodsys has posted a series of blog entries disputing Apple's licensing claims, announcing that they've begun suing app developers, and promising $1000 to each contacted developer if they're wrong about their rights.

Lodsys says they moved up its litigation timing in "response to Apple's threat, in order to preserve its legal options." Its thought that these legal options mean having the case go before the East Texas troll-friendly courts before Apple could request a declaratory judgment in a different jurisdiction.

Lodsys also responded to Apple's letter which stated that it and its developers are undisputedly licensed to the patents in question.

The letter was very surprising as Apple and Lodsys were in confidential discussions and there was clearly disagreement on the interpretation of the license terms of Apple’s agreement. Before, during and after these interactions, Lodsys has carefully considered this issue and consulted several legal experts to consider Apple’s claims. We stand firm and restate our previous position that it is the 3rd party Developers that are responsible for the infringement of Lodsys’ patents and they are responsible for securing the rights for their applications. Developers relying on Apple’s letter do so to their own detriment and are strongly urged to review Apple’s own developer agreements to determine the true extent of Apple’s responsibilities to them.

In a private communication, simultaneous to this posting, Lodsys has sent a detailed legal position on the license interpretation issue, in writing to Apple that has been previously only verbally communicated. Apple has our permission to publish that letter, in its entirety, should developers wish to review our dispute and evaluate the risks with their own counsel. While we have nothing to hide, we cannot unilaterally publish the letter because it refers to information that was obtained with an obligation of confidentiality to Apple and we do not have their permission to do so.

In an effort to show how confident they are in their case, Lodsys has promised to give each developer contacted $1000 in the event Apple is right.

Lodsys offers to pay $1,000 to each entity to whom we have sent an infringement notice for infringement on the iOS platform, or that we send a notice to in the future, if it turns out that the scope of Apple’s existing license rights apply to fully license you with respect to our claim relating to your App on Apple iOS.

This situation is bound to be a major topic at the upcoming World Wide Developers Conference in June. We'll let you know how Apple addresses this latest development. 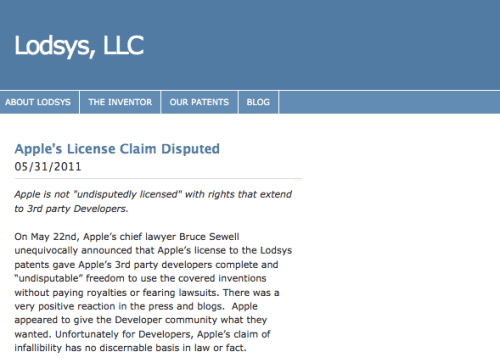 DanCJ - June 1, 2011 at 3:18am
This is shit. If (by some miracle) Lodsys turn our to actually be right they should be resolving it with Apple rather than goin after individual developers.
Reply · Like · Mark as Spam
0

Pain Reaper - June 1, 2011 at 4:17am
Lodsys policy is to attack the small individual that can't hit back.. Spineless is their CEO middle name!
Reply · Like · Mark as Spam
0