Microsoft has offered a sneak peak at Windows 8 and it looks a lot like Windows Phone 7.

The operating system was shown for the first time at The Wall Street Journal's D: All Things Digital conference in Rancho Palos Verdes, California.

According to All Things D, the goal with the OS is to create something that works equal well on an 8-inch tablet as on a powerful desktop attached to a large display. "It's 'no compromise' and that’s really important to us," said Windows President Steven Sinofsky.

First thing that you are going to see when you start Windows 8 is a new Start screen that features a personal mosaic of tiles. Every app on your system is represented by a tile. The tiles can live update and display information without you having to open the application itself.

Windows 8 will also support two different types of applications. One is the normal Windows application which runs in a desktop similar to Windows 7. The other is a new type of application that must be written in HTML5 and Javascript. These applications look similar to mobile apps and will fill the entire screen. Microsoft has already ported some of its applications such as Internet Explorer to this format.

Check out the video to see Windows 8 in action. Notice the tile for a Windows App Store... 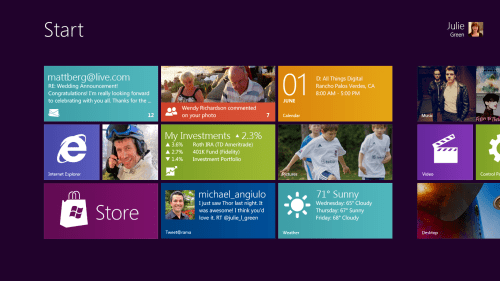 Spamslayer - June 2, 2011 at 2:08pm
Gosh... I am genuinely impressed, really! This is WAY ahead of current iOS 4 user experience! iPad 2 user interface looks sooo... outdated. OK, I am aware that is just a marketing movie, but this IS promising - Windows 8 can soon become a platform to beat, both for PCs and tablets.
Reply · Like · Mark as Spam

Microsoftporn - June 2, 2011 at 9:32am
Microsoft is like an American car company, They are always behind latest technology, people buy them cuz they\'re cheap and they brake not too long after.
Reply · Like · Mark as Spam

Applelover - June 2, 2011 at 1:07pm
Tiles are the evolution of apps, not a copy. Actually it\'s looks like a mix of apps and widgets, but you get more functions with tiles than with the other two. Don\'t be blind.
Reply · Like · Mark as Spam
12 More Comments
Recent