In a suit filed yesterday in the US District Court in Arizona, a company named iCloud Communications has claimed trademark infringements against Apple over the iCloud name.

iCloud Communications LLC is claiming that Apple's heavy promotion of the iCloud product is damaging its business and has removed the branding of the name and placed it onto Apple. To make matters worse, iClouds Communication's services are nearly identical to the ones offered by Apple.

The goods and services with which Apple intends to use the “iCloud” mark are identical to or closely related to the goods and services that have been offered by iCloud Communications under the iCloud Marks since its formation in 2005. However, due to the worldwide media coverage given to and generated by Apple’s announcement of its “iCloud” services and the ensuing saturation advertising campaign pursued by Apple, the media and the general public have quickly come to associate the mark “iCloud” with Apple, rather than iCloud Communications.

There is no specific amount of monetary relief set, but the suit does call for “all profits, gains and advantages” as well as “all monetary damages sustained”. The suit also asks Apple to refrain from using the iCloud name and to “deliver for destruction all labels, signs, prints, insignia, letterhead, brochures, business cards, invoices and any other written or recorded material” with the iCloud name.

It will be interesting to see how Apple responds to these allegations. 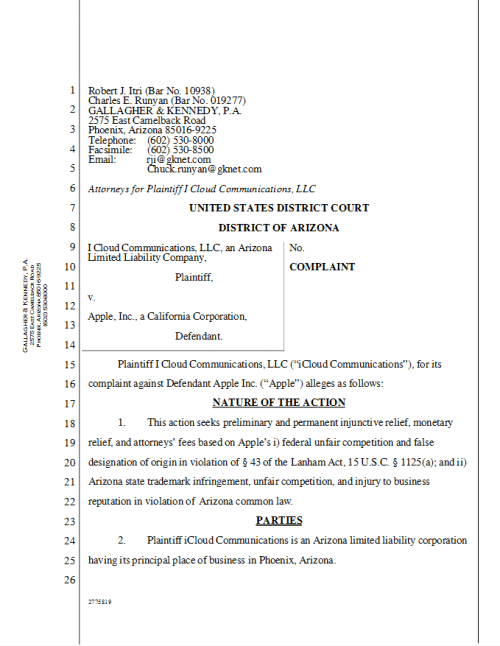 Mr yogi - June 11, 2011 at 8:45pm
If I was icloud communication and I can sue apple for millions I\'d do it. Shoot I\'d even sell the company to apple. With all the millions I made from apple I\'ll just start a new and better company or just retire haha
Reply · Like · Mark as Spam

Justin Simon - June 11, 2011 at 10:13am
LOL iCloud communications is a Voip company. They do not share any of the same services. How do they compair voip phone service to iCloud by apple which stores peoples data (pics, music, apps, etc) in the cloud? This case has no ground to stand on!
Reply · Like · Mark as Spam

eduard - June 11, 2011 at 6:28am
Look carefully at the embedd suit: It says \"I Cloud\" not iCloud. I assume the latter was conveniently added, but does this turn it into a trademark?
Reply · Like · Mark as Spam