Apple may begin testing the sale of 1080p movies via iTunes later this year, according to an AppleInsider report.

A handful of feature films being submitted to the iTunes store for a release in the September and October timeframe are being sent with documentation for an optional 1920x1080 resolution, according to people familiar with the matter.

For instance, one such film from 20th Century Fox was said to have arrived with encoding options for SD (480p), HD (720p), and a new, third format listed as HD+ (1080p). Similarly, a small number of upcoming releases from two of the other 'big 5' movie studios were submitted with optional resolutions of 1920x1080 and an average bitrate encoding of 10,000 kbps.

AppleInsider's sources say that Apple may also be preparing a new version of the Apple TV that will use the A5 processor found in the iPad. Currently the Apple TV isn't capable of 1080p playback and instead downscales to 720p. The new device would take advantage of the faster processor to purchase and playback 1080p movies bought from iTunes. 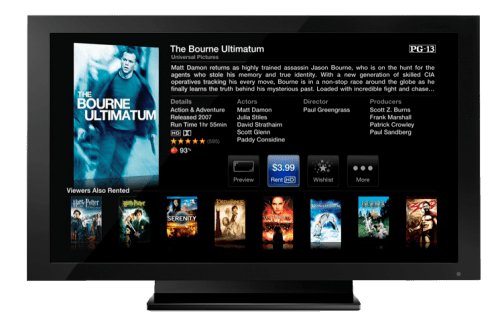