Apple may be hiring additional staff for the launch of the iPhone 5 in mid-August, according to a CNET report.

The site was tipped off to a job posting for iPhone sales specialists on the employment website Reed.

The post, which was sent to us by a tipster, asks for "full-time iPhone Sales Staff for an exciting project to work 5 days a week (Tuesday-Saturday) for the period 16th August - 29th October within key retail stores". The posting appears several times on Reed, with each post covering a different area of the UK.

The posting outlines job responsibilities that include: completing daily reports, providing a "first-class customer service experience", and to "capture the hearts and minds of potential customers".

A mandatory four-day training event will be held in London for those who are hired and the position pays £75 per day.

These hirings suggest that Apple is gearing up for a big product launch. The most likely candidate being, of course, the iPhone 5. Perhaps Apple plans to launch the device a bit earlier than most expect! 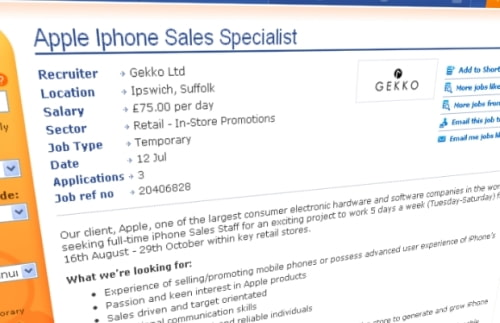 apple guy - July 14, 2011 at 1:43am
I love apple ..they just dont care when their products launches they know they will sell no matter what. Not like other manufactures,always waiting for holidays to take advantage of the consumers..low inventory,apple products is for those people that have a great jobs that make 6 figures and so..cant buy an iphone 4 $300 working at mcdolnals ..so Apple is for high class people. they dont care when macbook rpo or ipad is going to launch,people with good jobs will buy it at any cost..I paid $749 for an iphone unlocked ..doesnt matter..its all $$.. Making 2grand a month is not going to cut it
Reply · Like · Mark as Spam

DacksMac - July 15, 2011 at 7:12pm
Wow. Move to Europe where they don't make shit and everyone has Apple products, Armani, etc. They even buy tier phones for full price... Always! I bought a Motorola Razr when I lived in Italy for $550! So saying Apple is for rich people is a cop out excuse for saying you are shitty with managing your money.
Reply · Like · Mark as Spam
4 More Comments
Recent