The patent details "A method for fast booting a computer system, comprising the steps of: A. performing a power on self test (POST) of basic input output system (BIOS) when the system is powered on or reset is requested; B. checking whether a boot configuration information including a system booting state which was created while executing a previous normal booting process exists or not; C. storing the boot configuration information from execution of the POST operation before loading a graphic interface (GUI) program, based on the checking result; and D. loading the graphic user interface (GUI) program."

Patently Apple notes that it is difficult to assess if LG Electronics has any stake in the patent infringement case against Apple or not. 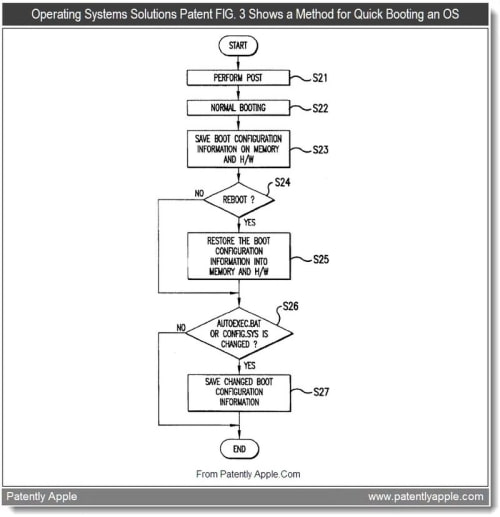 Cyber Angels - August 9, 2011 at 1:15am
PATENTING SOMETHING IS THE FIRST STEP TO PUT HUMANITY ON THE ROAD OF TOTAL FAILURE. PATENTING IS A DISTRACTIVE FORCE OF HUMAN CIVILIZATION. Patent laws must be strictly enforced , however if the patentor is not willing to create or put his ides to work within 5 years of time , the patent must be considered invalid and open for reproduction, copy and third party usage. Some restrictions may apply such as investor ,funds ..etc.
Reply · Like · Mark as Spam

Anonymous Coward - August 9, 2011 at 1:06am
Apple computers use EFI instead of BIOS, so does this even apply?
Reply · Like · Mark as Spam