Martin Fichter, acting president of HTC America says, 'iPhones are not that cool anymore' in an interview at the Mobile Future Forward conference, reports GeekWire.

"Apple is innovating. Samsung is innovating. We are innovating. Everybody is innovating. And everybody is doing different things for the end consumers. I brought my daughter back to college - she's down in Portland at Reed - and I talked to a few of the kids on her floor. And none of them has an iPhone because they told me: 'My dad has an iPhone.' There's an interesting thing that's going on in the market. The iPhone becomes a little less cool than it was. They were carrying HTCs. They were carrying Samsungs. They were even carrying some Chinese manufacture's devices. If you look at a college campus, Mac Book Airs are cool. iPhones are not that cool anymore. We here are using iPhones, but our kids don't find them that cool anymore."

Responding to a question about what's preventing the creation of an iPhone killer, Fichter said he's not sure they want to kill the iPhone.

"I've heard the term iPhone killer a lot of times, outside of my company and inside my company. Whenever I hear it in meeting rooms inside HTC, I caution people and say: 'Hey, look, there is a market there for the iPhone.' I don't think we want to kill the iPhone because it is geared to a certain amount of people who like things in a certain way, and we do something different. If you want to do the same thing as iPhone in exactly the same way, why don't you send your people to the Apple store and have them buy an iPhone? We want to do something different. We want to appeal to different end users who have different values. And, if you look at the segmentation and the demographics of what we are doing, we are selling phones to different people. So, I don't like the term iPhone killer. I think we do something different."

HTC and Apple are suing each other for patent infringement. Recently an ITC judge found HTC in violation of two Apple patents which appear to be at the core of Android. That decision has yet to be reviewed. 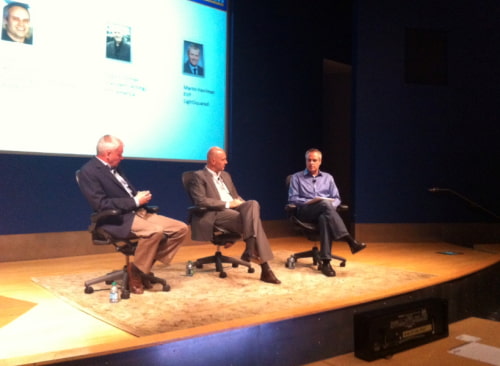 Maded - September 14, 2011 at 10:09am
As a tech support professional for 2 different carriers (ATT + VZW), I've had hands on experience with iOS, Android, BB, Windows phones for years. The overwhelming majority of the issues with phones I've dealt with involve Android and BB. These phones have so many software and hardware issues that I won't even start going into them all here. At least BB is well-documented and supported by RIM. Android is usually just hope and pray you can find something approaching a fix on some forum, because usually even the manufacturers aren't aware of the issue for some time. And if they are, you get a mumbled "software update in the works" on your call to them about it. iOS issues have been easy to find root cause and easy to solve. I can count one one hand the number of major issues I've dealt with. And most of them involved an idiot screwing up their JB attempt and flipping out. Windows phones? Oddly, I've had few if any major issues come up with them yet. Most have involved syncing with Exchange servers, but that's usually just somebody getting the server settings wrong on setup (and that kind of crap happens on all of the OS anyway). All in all, I'd say iOS or Windows win, hands down.
Reply · Like · Mark as Spam

Spase - September 14, 2011 at 3:09am
All the hype about who come up with what, who copied, who who who etc etc. iPhone was not first at anything, and before you put your 2cents forward please get all facts in order. The first FULL TOUCH screen phone was the IBM Simon in 1992. Design copied??? By what I recall LG Prada design came out long long before the iPhone 4. iPhone copied a hell of a lot from Linux, webos, symbian, android... Which isn't bad because ideas build on ideas, evolving for ever for without evolution we'd still be nit picking up in trees. To compare iPhone v Android?!?! I see iPhone as the fit toned 100 meter runner who is quick and smooth in a straight dash, and the Android as the super ironman triathlete that out performs in every other way.
Reply · Like · Mark as Spam
18 More Comments
Recent