Apple has an 89% retention rate which is over twice as high as its competition, reports UBS Research. The firm polled 515 smartphone owners asking which phones they owned and which they plan to buy next.

"In general, retention rates appear to be falling for most of the OEMs. Relatively, Apple's retention rates have held up incredibly well even as its market share has risen. Interestingly, when we look at all consumers who are considering changing handset OEM provider, Apple remains a significant net beneficiary. Alongside Apple, only Samsung and HTC also appear as net beneficiaries (more users won than users lost). Interestingly, of our respondents who are current Apple subscribers, only 6% indicated that they intended to move to a different OEM, with 4% saying they were undecided. This suggests that the retention rate for Apple could end up being as high as 93%." 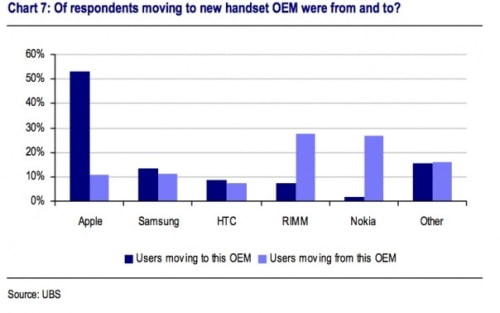