The software will now detect connected devices and allows users to quickly sync downloaded content to the device.

The new release allows users to drag and drop downloaded files to Apple and Android devices, as well as the PS3 and Xbox 360 game consoles. In addition, the latest alpha also shows the option to convert files into the appropriate formats supported by the various devices. However, TorrentFreak has learned that this tease was put in by mistake and that it will be removed in the next update.

The ability to convert files will only be available to those who upgrade a premium uTorrent version, the upcoming uTorrent Plus. 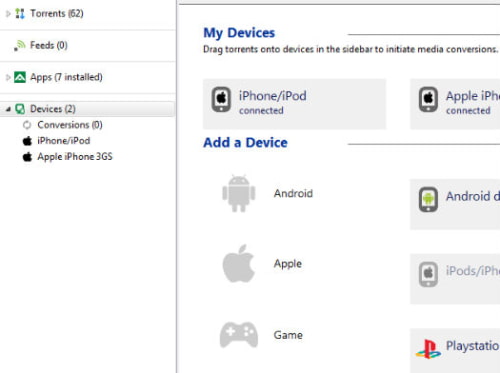 biggot - September 24, 2011 at 9:56am
well instead of paying in the future for the premium (converting) utorrent, i mite aswell use this alpha release for ever with its free converting powers and all..
Reply · Like · Mark as Spam
Recent