According to the book, Jobs nearly missed meeting Obama in 2010 because he wanted a personal invitation from the President. The standoff lasted for five days before Jobs relented and they met at the Westin San Francisco Airport.

"You're headed for a one-term presidency," he told Obama. He insisted that the administrator needed to be more business friendly and cited the ease with which companies could build factories in China unlike the U.S. where regulations and unnecessary costs make things difficult.

Jobs also criticized the education system in America, saying it was "crippled by union work rules."

"Until the teachers' unions were broken, there was almost no hope for education reform." Jobs reportedly proposed allowing principals to hire and fire teachers based on merit, that schools stay open until 6 p.m. and that they be open 11 months a year.

Finally, Jobs suggested that Obama meet for dinner with six or seven other CEOs who could help express the needs of innovative business. When the White House began adding too many names to the list of attendees, Jobs said that it was growing too big and that "he had no intention of coming." Exhibiting his notorious attention to detail, Jobs also complained the menu was far too fancy and objected to a chocolate truffle dessert. He was overruled by the White House which cited the president's fondness for cream pie.

Though Jobs was not that impressed by Obama, later telling Isaacson that his focus on the reasons that things can't get done "infuriates" him, they kept in touch and talked by phone a few more times. Jobs even offered to help create Obama's political ads for the 2012 campaign. "He had made the same offer in 2008, but he'd become annoyed when Obama's strategist David Axelrod wasn't totally deferential," writes Isaacson. Jobs later told the author that he wanted to do for Obama what the legendary "morning in America" ads did for Ronald Reagan. 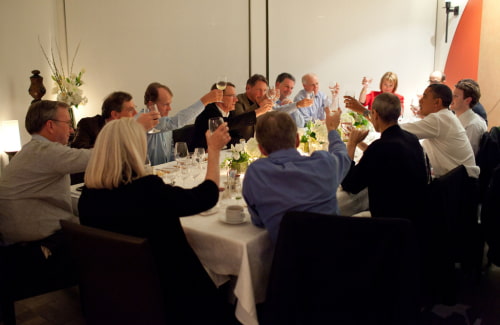 Ed Klein - November 1, 2011 at 8:07pm
Few of you commenting could reinvent the old-fashioned wired telephone of you were given one to copy. EdK
Reply · Like · Mark as Spam

Greyfots - October 22, 2011 at 2:47am
I'm guessing that all this pricks that are hating on Steve jobs, Own an android product because they can't afford an apple product
Reply · Like · Mark as Spam

Edem Seshie - October 21, 2011 at 8:37pm
@Zzzz et all the jobs haters,let me here from you again when you've been able to create so much as an A4 sheet. Until then shut the f up and try to make smthg meaningful of your life and stop wagging your unproductive tongue about at achievers. Such disrepespect. Everyone talks just because they have a mouth. even those who have nothing to say.
Reply · Like · Mark as Spam

gringo - October 21, 2011 at 10:40pm
Yeah Seshie, Jobs was once a liberal, but when his company started making the big bucks he quickly turned in a conservative, trying to figure out all the ways to not pay taxes, to get amnesty for the billions of $ he has overseas, and complain about Obama. Why didn't he run for office? 'Cause it doesn't pay that much??? People aren't trying to be disrespectful here, just they want the whole truth to come out, not just how great Jobs was. He was a human being, with a great capability to see what could be a great product and with great marketing skills, but also a huge prick more often than not.
Reply · Like · Mark as Spam
18 More Comments
Recent