Apple today announced iTunes 8, the next major release of Apple's ubiquitous music and video player for Macs and PCs which is seamlessly integrated with the most popular online content store in the world (http://www.itunes.com/). iTunes 8 includes the new breakthrough Genius feature, which lets you automatically create playlists from songs in your music library that go great together -- with just one click. Genius helps music fans rediscover favorite songs in their existing music library and suggests related music on the iTunes Store they might want to add to their music collection. iTunes 8 features new ways of viewing your music and video libraries, and adds television programs in stunning high definition for sale on the iTunes Store. 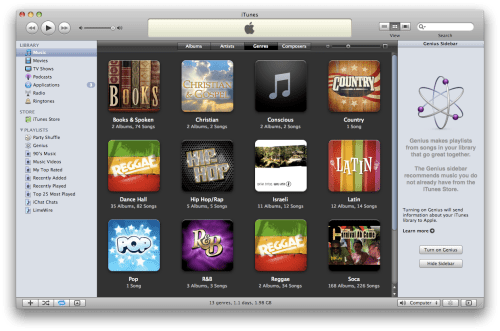 Using Apple's breakthrough Genius feature is easy-select any song, click the Genius button, and iTunes instantly creates a playlist of songs that go great together from your own library. You can preview the playlist Genius creates, refresh the list to choose different songs and save Genius playlists to enjoy again later. You can even create Genius Playlists on-the-go with the new iPod(R) classic, iPod touch, iPod nano and iPhone(TM). The Genius sidebar appears right in iTunes and recommends music from the iTunes Store that you don't already have, based on the songs you select.

When you turn on iTunes 8's new Genius feature, information about your music library is anonymously sent to the iTunes Store, where it is combined with the anonymously-gathered knowledge from millions of other iTunes users and processed through Apple-developed algorithms. The Genius results, specifically tailored to your personal music library, are sent back to your computer to enable users to automatically create Genius playlists in iTunes and on your iPods, even when they are not connected to the Internet. 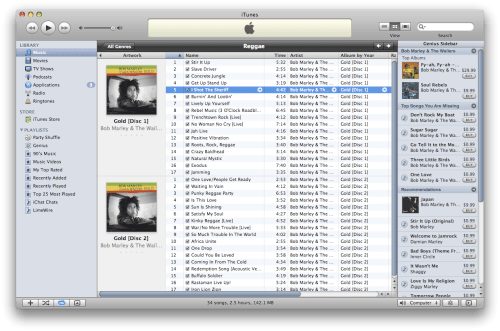 The iTunes Store has become the world's most popular online TV store and features an incredible selection of over 30,000 episodes from ABC, CBS, The CW, FOX, NBC and over 70 cable networks including Bravo, Comedy Central, Disney Channel, ESPN, FX, HBO, MTV, Nickelodeon, Sci Fi, Showtime and USA. With iTunes 8, television fans can now watch their favorite programs from ABC, NBC and Showtime in stunning HD for just $2.99 per episode, perfect for viewing on their Mac(R) or PC, or on their widescreen TV with Apple TV.

The iTunes Store is the world's most popular online music, TV and movie store with a catalog of 8.5 million songs, over 30,000 TV episodes and over 2,500 films including 600 in stunning high definition video. With Apple's legendary ease of use, pioneering features such as iTunes Movie Rentals, integrated podcasting support, iMix playlist sharing, the ability to turn previously purchased tracks into complete albums at a reduced price, and seamless integration with iPod and iPhone, the iTunes Store is the best way for Mac and PC users to legally discover, purchase and download music and video online. 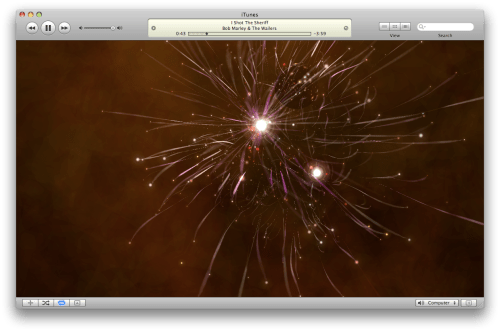 licotto - September 10, 2008 at 7:49pm
@ xxx how is it \"nearly impossible\" to have 75gb of music?? First of all, that is NOT hard. Depending on if you RIP in lossless or not...Second, My library of 75gb includes MOVIES, PODCASTS, AUDIOBOOKS, and MUSIC -didn\'t realize we need to nitpick the comment... Besides, if you had as many CD\'s as some people that were HUGE music nuts before MP3\'s came around, then creating a huge library is NOT difficult -especially if you understand that some Audiobooks are up to 2gb just for ONE BOOK. Thanks for your \'concern\' though, I guess. haha
Reply · Like · Mark as Spam

xxx - September 10, 2008 at 4:22am
i fear that the genius feature might end up as a bad idea if you have some downloaded songs (illegal) or smth I don\'t know how much of your info they get but i guess ALOT and I guess they will (since they are allowed to) use this info not only for apple but also for other kind of stuff where they can make money with it.. i\'m not 100% sure yet cause I didn\'t read the agb yet anyone read it maybe and has some infos on this point? and btw post before me its nearly impossible to have 75gb legal music :p
Reply · Like · Mark as Spam

licotto - September 9, 2008 at 8:26pm
@ JeremyR Wow, I thought that\'s why you iPhone lovers were excited for the \'open\' programming...maybe I\'m wrong. I thought it was ok to have the 3rd party programmers create something that Apple didn\'t...that\'s what I do on my Palm phone. As to us \"Apple lovers\", maybe you should mind your suggestions when mouthing off as to whether someone is being a fanboy or just trying to point out something. Sorry that itunes/iphones don\'t play well -not an issue for me since i\'m not on iphone -but do you think iphone would play better with the MS Zune\'s interface program?? yeah, didn\'t think so... As to the \"If Microsoft pulled this...\" comment, um, has it NOT already?? Have I said ANYthing about them NOT pulling money-making crap??? Have I said anything about how I know that Apple is about the bottom line?!? No, in fact, I haven\'t -because it wasn\'t relative to any point I had made! My point, if you read back again...this time go slower, was that IF you don\'t like iTunes in the first place, DON\'T buy the device(s) that WORK off of it. And no, I\'m not an idiot and think that Genius is AWESOME, I get that its another money ploy -a freakin smart one, but a ploy nonetheless. I simply said it was a cool idea -I don\'t know exactly what they\'re using to filter for this feature, but that doesn\'t detract from the fact that it is still a cool idea. If you want to run thru your entire library piecing together playlists, knock yourself out -but I\'d like something that could help me find old music I haven\'t listened to for a while -WITHOUT having to scroll thru 75+GB of music! Thanks for \"listening\"....
Reply · Like · Mark as Spam

JeremyR - September 9, 2008 at 6:57pm
licotto - \"Also, Apple can design THEIR devices to work with THEIR programs, allowing a much more seamless interface. Yeah it might be bulky, but they work. Isn\'t that kind of the whole basis of Apple\'s computers?\" FAIL. The problem is that the iPhone and iTunes DO NOT \"just work\" as you suggest. I\'m a tech-savy power IT business user and I have had to completely hack my iPhone six-ways-to-Sunday to get it to even begin to function as a business device. And no, I do not have outlandish expectations. As an example, I just want to know when I have an email. This is basic functionality and something you can\'t do with the iPhone. If the phone is locked, you can\'t tell that you have a new e-Mail. You have to unlock the phone, go into the email app and then look at your email to see if anything\'s new since you last looked. I don\'t think it\'s too much to ask to be able to see on the lock screen that I have new eMail (and thank Zarathushtra that IntelliScreen is available to solve this). In order for something to \"just work\" it has to be have a high usability factor. The iPhone does some very trick stuff but usability isn\'t really one of them. As far as \"Genius\" goes...I don\'t need an app to tell me how my music relates...I can do that just fine on my own. Sade and Korn obviously don\'t go together. If you read the marketing spin, you\'ll see the phrase that Genius helps you find similar music TO BUY. This is my problem. Why not focus on the core problems? There are very simple and easy improvements that can be made to iTunes and iPhone to make them \"just work.\" Instead, Apple is focusing on driving sales. If Microsoft pulled this, all you Apple lovers would be all over them in a heartbeat...but if Apple does it, then it\'s \'ok\'. Apple and MS are the same...they\'re just in it for the money...and I\'m glad that Apple is finally showing those true colors.
Reply · Like · Mark as Spam

licotto - September 9, 2008 at 5:25pm
While I agree that it may not be worthy of a full number upgrade, it is a nice update. I don\'t agree with Genius being a \'ripoff of Pandora\'. In actuality, there were many programs doing that before Pandora did, they just were not web-based as much. I had a program that put \'like\' music together 2 years ago. As to the supposed \'iPhone dilemma\', if you didn\'t like iTunes, that would\'ve probably been a major part of why you maybe should NOT have gotten an iPhone. If you know the MAIN interface is iTunes and you hate it, it\'s kind of a no-brainer. Why would Apple, in a business aspect, want to open iTunes to other devices (or vice versa in some way) and take away from their profit margin? Also, Apple can design THEIR devices to work with THEIR programs, allowing a much more seamless interface. Yeah it might be bulky, but they work. Isn\'t that kind of the whole basis of Apple\'s computers?
Reply · Like · Mark as Spam
4 More Comments
Recent