Apple has released the iPhone 2.1 firmware which contains many bug fixes and improvements.

Again, we recommend not updating your iPhone to the 2.1 firmware until the iPhone Dev-Team releases an update to PwnageTool. This may be important for those hoping for an unlock in the future. 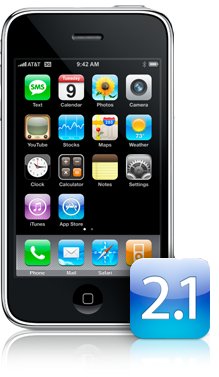 lyrrad - September 13, 2008 at 6:35pm
glad I could help Kyle. Has anyone noticed a lag while filling out web forms on the device? It feels like the spell check is slowing input. Same lag when deleting text. This is making it hard to type fast. I also noticed volume is lower in video playback. I will reset the device to see if this changes. Oh, one more odd thing. Old text messages that I had deleted are back. Anyone else have this happen?
Reply · Like · Mark as Spam

rockerzzz - September 13, 2008 at 1:38am
The itunes backup still soooooo sloooooooow not much different from 2.02
Reply · Like · Mark as Spam
22 More Comments
Recent