Syrian authorities have banned the use of the iPhone in an attempt to prevent activists from documenting government violence, reports Elnashra.

According to TNW, activists in the country are being served with notices from the Customs Department of the Syrian Finance Ministry that reads:

"The authorities warn anyone against using the iphone in Syria."

The 2011 Syrian uprising is an ongoing internal conflict occurring in Syria. Protests started on 26 January 2011, and escalated into an uprising by 15 March 2011. The uprising, which the United Nations considers a civil war, is influenced by concurrent protests in the region, and has been described as "unprecedented." The demands of protesters include for President Bashar al-Assad to step down; for the ruling Arab Socialist Ba'ath Party to allow other political parties; for equal rights for Kurdish people; and for broad political freedoms, such as freedom of press, speech and assembly. [W] 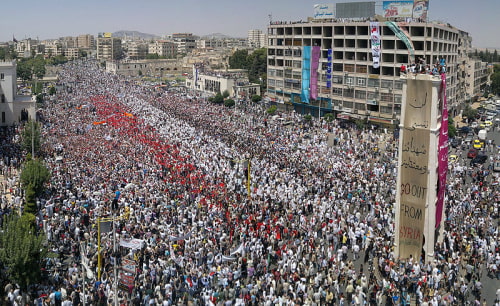 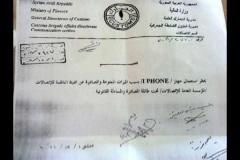 Free Syrian - January 1, 2012 at 7:48pm
Thank you to mention that, we are really suffering by this decorator Assad hope we get our freedom soon.
Reply · Like · Mark as Spam

khaled - December 4, 2011 at 3:53pm
what do u know about muslems? ur a f**k and u dont have the right to talk of anybody this way, i dont care where r u from but i hope u suck on ur life, and people spit on ur face you shit, and i hope u die from hunger, i hope u find no 1 to help ur pathetic ass coz ur a disrespectful person. people arent all the same, dont speak of muslems like u know them, stick to your shit media and stay ignorant
Reply · Like · Mark as Spam

mike - December 4, 2011 at 8:39am
LOOOOOL, iclarified is now bring used as a news agency to advertise against Syria too? where in the world human rights are respected in the USA and CANADA are the most 2 countries where Human rights are bent to give authorities the right to arrest anybody they want by creating a fake motive and nobody can say one word, then release them. we wish freedom for all The people in Syria and god bless them all, But why Iphone, while they have all kind of advanced phone like Samsung Galaxy , and HTC etccc... don't they all have camera'a and place calls? what a funny topic to be on iclarifed while nothing is confirmed from the whole story.
Reply · Like · Mark as Spam
20 More Comments
Recent