Apple is reportedly dropping the minimum commitment for an iAd campaign to $400,000, according to the WSJ. Losing ground to Google in the mobile-ad market, Apple had already dropped the minimum buy from $1 million at launch to $500,000.

Marketers have long complained about the high price tag and Apple's stringent control over the creative process, so the company is apparently trying to be more flexible.

Apple has also introduced more flexibility to a pricing structure that had befuddled advertisers, ad executives say. Instead of charging marketers every time a user taps on an ad-a policy which often led to ad budgets quickly being exhausted-Apple is willing to put a cap on what it charges for the taps, according to the person. Advertisers pay $10 every time an ad is viewed a thousand times and $2 every time it is tapped on.

Last month, Apple released a new version of iAd Producer which aims to make the creative process easier for clients. 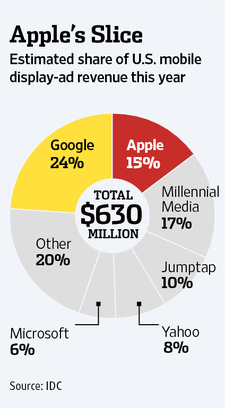