It turns out the Microsoft's 'I'm a PC' campaign was created on Macs running Adobe Create Suite 3, according to an observant Flickr user.

Flickr user LuisDS found that metadata on the photo of PC and other photos appearing on Microsoft’s “I’m a PC” website show that they were made using Macs running Adobe CS 3. You would think that Microsoft would use Windows PCs running Microsoft Expression Studio software, which the company says, “takes your creative possibilities to a new level." 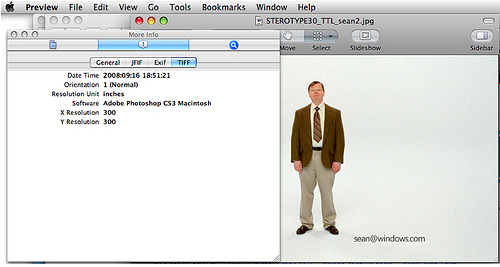 After LuisDS published this information on Flickr, Microsoft spent the night trying to remove these details from their files. This morning the files have been changed resulting in the 272 KB photo ballooning to 852 KB.

Robert - September 21, 2008 at 9:18am
Lyrrad: It may not be news... but it is curious. It's sort of like if Obama told someone in confidence that he would vote for McCain. And besides, this time it wasn't Apple people who made Microsoft look bad; they did it all by themselves.
Reply · Like · Mark as Spam
0

Lyrrad - September 20, 2008 at 5:23pm
Come on People, are we that desperate to make Microsoft look bad. Do we really think that they would dictate what tool the designers and editors should use. This is silly and not news worthy, the fact that there is yet another issue with the iPhone that might burn my house down (one week after I upgraded to the 3G), that's news and that pisses me off. Grrrrrrrrrrrrrr.
Reply · Like · Mark as Spam
0

Pong - September 20, 2008 at 3:36pm
Actually it makes perfect sense; most ad companies use macs, so why wouldn't it be made on a mac?
Reply · Like · Mark as Spam
2 More Comments
Recent