TorrentFreak has reported the leak of the alpha version of µTorrent for Mac onto The Pirate Bay.

Back in 2007 a Mac version was expected to be released; however, the project was dropped due to a lack of active developers.

Now it seems that a Mac version is actually going to materialize soon. Not only has the alpha version been leaked into the wild but µTorrent has setup a notification service for those anticipating the Mac release.

You can signup here: http://mac.utorrent.com

Simon Morris, BitTorrent’s VP of Product Management told TorrentFreak in a response to the leak: “Apparently an internal development build of uTorrent for Mac has been leaked publicly. It has been referred to as an “alpha” quality build. The unfortunate part is that we did not intentionally release this build and would strongly recommend folks not to use it as it isn’t yet complete or stable enough to be released to the public.”

“The good part is that this is a testament to the fact that we’re serious about releasing uTorrent for Mac in the near future. (And counter to recent rumors, this is indeed the uTorrent code-base ported onto OSX, not just Libtorrent with a Mac UI). Hopefully more news coming soon. We have a sign-up page on the uTorrent website.” 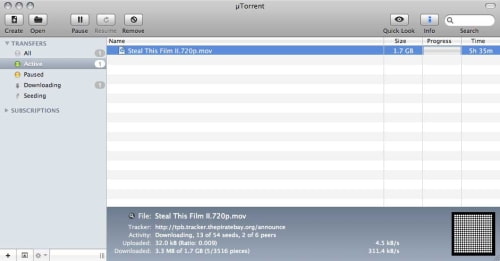